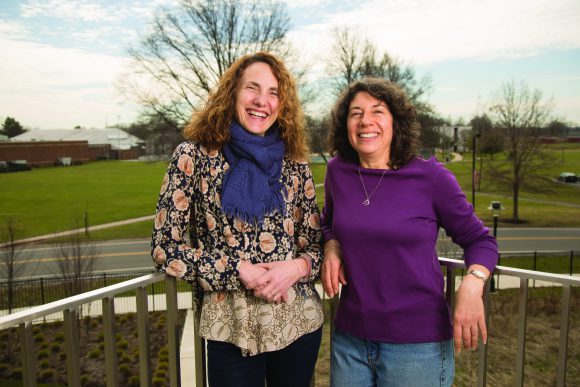 Loredana Quadro, Associate Professor of Food Science and member of the Rutgers Center for Lipid Research, and Susan Becker, teaching instructor in the Department of Animal Sciences.

Nearly half a century after Queens College was founded, the institution fell on hard times. Colonel Henry Rutgers, an esteemed officer in the Continental Army, a wealthy landowner, an important leader in the community, and a generous philanthropist, resuscitated the struggling institution with a gift of $5,000 and a bell—and you know the rest.

Fast forward 200 years. Institutions of higher learning across the country are still in need of philanthropic support. Where better to receive that support than from insiders—faculty and staff who work for the university and who know and appreciate the great work that is done through their efforts.

Two such individuals are among scores of faculty and staff who have made SEBS and Rutgers part of their philanthropic portfolio.

Loredana Quadro, associate professor in the Department of Food Science, joined Rutgers as a faculty member in 2005 and within three years signed on as a donor through the payroll deduction program. Her department had just launched a “Re-Connect with Rutgers Food Science” campaign, and Quadro embraced payroll deduction—in which a Rutgers employee can pledge an annual gift and direct the payroll office to divide the amount into bi-monthly donations—as the most efficient way to satisfy her philanthropic goals

“I wanted to be sure that my gift was going to the department,” she says, “and I also designated a fund that supports graduate student fellowships because there is a great need in that area. Payroll deduction is the easiest way to do it. The moment you decide to give back to the institution— where I spend most of my time doing the work that I love—you are showing appreciation and supporting students and the department.”

Rutgers has played a central role in the life of Susan Becker, research assistant and teaching instructor with the Department of Animal Sciences. Her father, Seymour Becker, was a Rutgers professor for 40 years in the history department. She earned both her undergraduate (CC’85) and graduate (GSNB’92) degrees in animal science and has spent her career at the university.

After graduation, Becker started giving $25 a year to her department. “For quite a while I was reluctant to give more because I figured that as an employee, they hand you money so why would I be handing it back? But even though it was a token, I realized that if everyone did it, think of the impact it would make.”

Next, Becker took an even bigger step. She added a bequest to Rutgers in her will, which made her a member of a very special club— the Colonel Henry Rutgers Society—composed of those who wish to give after they are gone. Most recently, Becker contributed to Rutgers Gardens’ Cook’s Marketplace. She says: “I’m single, I don’t have children, and I’ve gotten to a point where I think, ‘why not?’. Giving to Rutgers now gives me an even greater sense of belonging.” 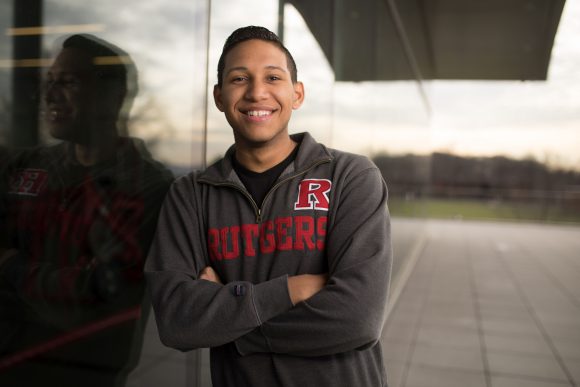 Who benefits from the philanthropy of faculty, staff, alumni, and friends? Jose Corporan is just one of thousands.

Corporan SEBS’17 received the Anthony Nicholas Betances Scholarship for this year. He says, “I have always felt very lucky to be enrolled in such a prestigious institution in spite of the financial hardships of my family. Because of this, I have always done my best to give back to Rutgers as well as surrounding communities.”

A resident hall assistant, he mentors 200 students. This position led him to the Cook/Douglass Residential Council, which works with the City of New Brunswick to “help improve such things as sidewalks, lighting, and other important components.”

He also served as the recruitment chairperson for the Latino Student Council, meeting with high school students in inner cities to “motivate them to consider higher education as a viable option for their future.” A member of Alpha Zeta, the honor and service fraternity, he strives to make a positive impact on other people’s lives—now and after graduation.

Surely, this is in keeping with the intention of the Anthony Nicholas Betances Scholarship, named after an Alpha Zeta brother who died shortly after graduation in 1994. Through gifts from family, classmates, and friends, the scholarship supports a legacy that remains alive in such recipients as Jose Corporan.

Editor’s Note: this article originally appeared in the Spring 2017 edition of Explorations.