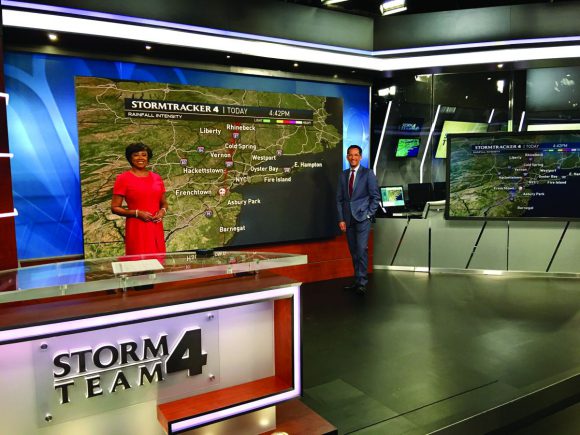 Editor’s Note: This story first appeared in the Spring 2017 edition of Explorations, the magazine for alumni and friends of the Rutgers School of Environmental and Biological Sciences. Since then, the NBC Storm Team visited Cook Campus, the home of the Doppler radar, and interacted with student meteorologists.

The next time you visit the George H. Cook Campus, take a drive down College Farm Road. You’ll notice it peeking above the trees, a white globe hovering above the farms and foliage. It’s the School of Environmental and Biological Sciences’ newest technological resident: a cutting-edge Doppler radar called StormTracker 4. 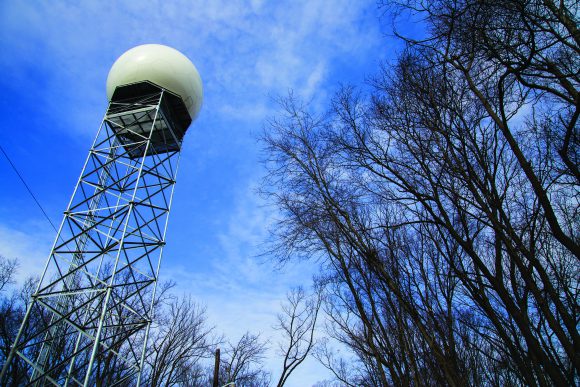 Back in 2015, Rutgers was approached by NBC 4 New York with an interesting proposal. The network needed a location for its new Doppler weather radar, one that was within the New York metropolitan area but not in the city proper, where buildings and other considerations can interfere with radar coverage. NBC was also interested in partnering with a university, and Rutgers houses the only program in New Jersey that meets federal requirements for meteorology. Would the G. H. Cook Campus be interested in making a home for StormTracker 4?

Rutgers and SEBS were interested, but there had to be an academic purpose behind bringing StormTracker 4 to campus. As it turns out, explains Anthony Broccoli, chair of the Department of Environmental Sciences, this was an easy one: having a radar of this caliber on site is a tremendous learning opportunity for students.

With StormTracker 4 on campus, students will have access to its data in their classes and get hands-on experience about how radar works that will complement the instruction they get on the theory of how radar works. “The information they would have had access to previously is information that anyone can get on the internet,” Broccoli explains. “And while that information is wonderful, it’s not quite the same as having a radar locally.” 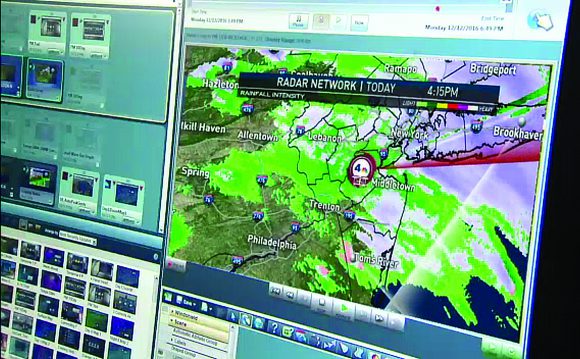 In the classroom, courses that focus on radar and remote sensing previously relied on examples from other systems. But there is no substitute for being able to see something this powerful in action, right here on campus, in different weather situations. Plus, students will be able to experience first-hand the different modes of operation allowed by a sophisticated radar like this. Broccoli imagines that StormTracker 4 will also open doors for meteorological research at the university both at the undergraduate and graduate level.

WeatherWatcher, a partnership between the School’s meteorology program and RU-tv, especially stands to benefit since a main component of it is that students are taught to produce daily weather forecasts and full-length science shows for the campus television station. Now, in addition to the video, sound, and editing equipment they learn to use, students will have access to the radar data from StormTracker 4 and broadcast their reports using this real-time data. RU-tv viewers, too, will benefit from the reports generated by the new imaging.

Having this kind of technology on campus also opens doors for Rutgers students once they leave, beginning with the fact that they’ll be able to add this hands-on experience to their resumes and audition reels. From data access to networking opportunities that may arise from this partnership, the StormTracker 4 is bringing more than a new piece of equipment to campus, says Broccoli: “It’s paving the way for a range of opportunities for our students down the road.”

The decision to bring this technology to Rutgers was also a win for NBC. “Supporting science education and cultivating a lifelong interest in weather are important to NBC 4 New York and Telemundo 47,” says a network spokesperson. “Through this unique partnership, our stations have a great opportunity to collaborate with a new generation of scientists and weather experts.”

And for the public? Anyone locally who depends on NBC’s media outlets for news—through their televisions or through a mobile application— will benefit from this radar. “For alumni,” Broccoli adds, “it’s the pride in knowing that this is right here on the Rutgers campus and students from our university are having opportunities they may not have otherwise had.”