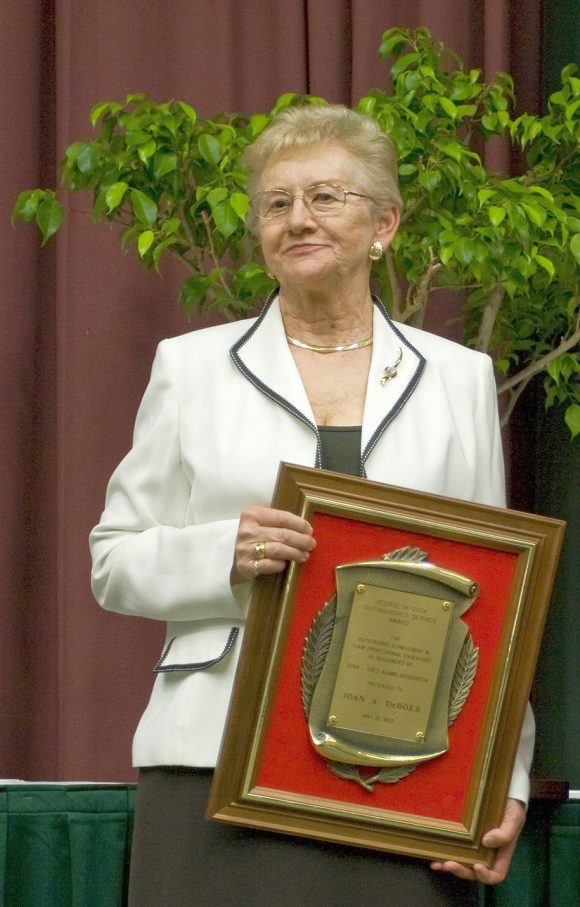 The Rutgers Alumni Association (RAA) hosts a gala evening, every year in the spring, to honor those individuals who have made a significant contribution of service to their alma mater. Among the awards made to alumni volunteers by the RAA, the Loyal Son / Loyal Daughter award is the highest acknowledgement of service from this chartered organization of the Rutgers University Alumni Association. And this year it was bestowed on Joan A. DeBoer.

“The Loyal Sons, Loyal Daughters Award from the Rutgers Alumni Association means the world to me,” said DeBoer. “It’s an award I never in a million years expected to receive.”

Joan A. DeBoer, the granddaughter of immigrants, grew up in a large Polish family in Sayreville. In 1953, the day after she graduated Sayreville High School, she began working as a clerk for Rutgers and found her “home” at the University. She earned a BA degree in sociology in 1984 from then Cook College and retired in 1993—after a 39-year career— as assistant dean in the Office of Resident Instruction, now Academic affairs.

During her tenure, DeBoer acquired an encyclopedic knowledge of Cook College’s alumni, faculty, and staff.  When she retired, she inquired into joining a group for retired Rutgers employees. She discovered there was a university retired faculty group, but she was not eligible to join. There was nothing available for retired administrators and staff to continue their relationship with Rutgers.

It was at that moment, when she conceived of the retired staff association idea and brought it to the Administrative Assembly. Their first meeting was in 1994 and the Silver Knights were born.

DeBoer also served on the executive board for approximately 25 years as the Cook College representative and, with the Silver Knights has lobbied for the Rutgers budget and program in Trenton, held fundraisers and steadfastly supported her beloved RU. She has participated in Rutgers Reunion parades and homecomings, and served on Membership, Elections and Sunshine Committees.

In 1993 Cook College honored DeBoer with the George Hammell Cook Alumni Award. And in 2003 she received the Distinguished Service Award from the Cook Community Alumni Association. DeBoer epitomizes the dedicated, engaged Rutgers woman and for these reasons was inducted into the Loyal Sons, Loyal Daughters of the Rutgers Alumni Association in April of this year.