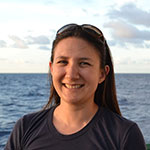 Diane Adams, assistant professor in Marine and Coastal Sciences and in the Institute for Earth, Ocean, and Atmospheric Sciences, passed away on June 22. She was in hospice and died peacefully in the presence of her family. While not well for several months, she continued to be active in her research and teaching until very recently.

She was a AAAS Science and Technology Policy Fellow from 2012 to 2013.  She joined Rutgers in 2013 and was reappointed in 2016 as a tenure track Assistant Professor.

Prior to her arrival at Rutgers, Dr. Adams had a strong history of fellowships including those from American Association for the Advancement of Science-Science and Technology, United States Agency for International Development (UASAID) and the National Institutes of Health.

Dr. Adams was an active researcher who carved out a niche in a new research area of developmental biology focusing on the potential for neural plasticity and evolution to create new metamorphic changes in marine organisms in response to environmental changes.

She was a contributing author of USAID’s 2015 Biodiversity Research Agenda.

She was a valued teacher in her Department and was a critical contributor in designing new courses in Marine Sciences. Dr. Adams was a firm believer in hands-on teaching and opened her laboratory to students, providing them with invaluable experience in collecting real research data and preparing manuscripts for publication. She also taught a Byrne Seminar in Biodiversity and Global Health, and her teaching and course quality were excellent.

She was very passionate about her area of research and had a great gift to make others share her excitement. She had a wonderful sense of humor and could tell engaging stories about her travels.