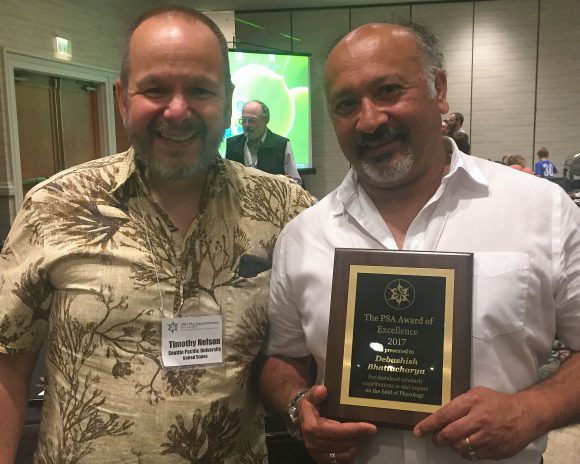 The 2017 Phycological Society of America (PSA) Award of Excellence was presented to distinguished professor Debashish Bhattacharya at the annual society meeting in Monterey, CA on June 8. The PSA Award of Excellence honors scientists for a record of sustained scholarly activity, including teaching and service, who have had a major impact on the field of phycology (algal science).

Single celled Paulinella used to study the origin of photosynthesis through primary endosymbiosis.

Bhattacharya, Department of Ecology, Evolution and Natural Resources, was cited for his work on using phylogenetic, genomic, and other methods to reconstruct the evolutionary history of the photosynthetic organelle, the plastid, in algae and plants, and in elucidating the contribution of photosynthesis to generating biodiversity on our planet.

How did the photosynthetic organelle, the plastid (also known as the chloroplast), originate through endosymbiosis, when did this event occur, and how did the “host” of the new organelle learn to integrate it into its biology? These are some of the major questions that have animated the genomics, bioinformatics, and functional work done by the Bhattacharya group. Their research has led them to look back over 1 billion years in time when the first plastid originated, as well as to evolve living algae in the lab to make them “fitter” for commercial uses. 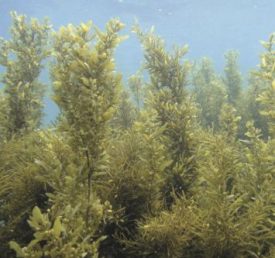 His work has appeared in over 200 papers published in many prestigious journals including, most recently (June 10, 2017), an invited review in Trends in Plant Science entitled, “The Algal Revolution” that Bhattacharya led. The paper describes the most recent advances in the field of algal ‘omics’ (e.g., genomics, proteomics, genetics).

Debashish has had a long association with the PSA and is currently one of the Editors-in-Chief of the Journal of Phycology, the society publication.

Previous winners include Elisabeth Gantt, John Raven, and Robert Guillard, all of whom have made significant contributions to algal biology and beyond.

Read more about the Phycological Society of America’s Award of Excellence.