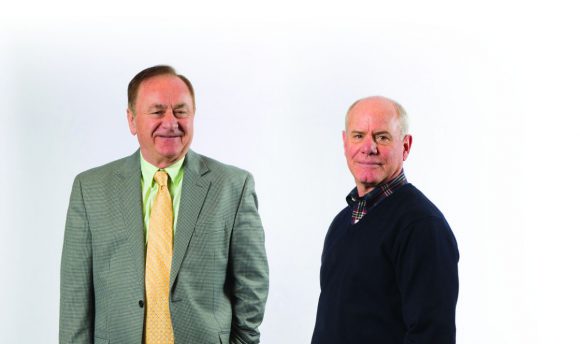 Every year, the American Association for the Advancement of Science (AAAS) names its newest Fellows: researchers from around the world who have been nominated by their peers for their outstanding scientific work. Fellows are recognized for achievements across disciplines, from research and teaching to technology and administration. This year, 10 Rutgers faculty members were honored with the title, two of whom hail from the School of Environmental and Biological Sciences: Henry B. John-Alder of the Department of Ecology, Evolution, and Natural Resources, and Pal Maliga of the Department of Plant Biology.

Pal Maliga is a distinguished professor Department of Plant Biology and the Waksman Institute of Microbiology. Maliga’s research focuses on plastids, double-membraned organelles found in plant cells that are necessary for a range of life processes. The best-known plastids—chloroplasts—convert sunlight into chemical energy.

In the 1990s, Maliga and his team at Rutgers developed the technology of chloroplast transformation in tobacco plants, which uniformly alters thousands of plastid genome copies in a cell. This has led to an explosion of research concerning the chloroplast genome’s role in photosynthesis, functional analysis of plastid genes by reverse genetics, and mechanisms of plastid gene regulation.

“It sounds very abstract but it’s become very important because this is the key to engineering photosynthesis,” Maliga explains. “What photosynthesis does is convert sunlight energy into biomass. This conversion is what sustains life on Earth.” Maliga estimates that if there are currently about 7.5 billion people on Earth and by 2050 there will be about 9.5 billion people, we need to produce twice the amount of grain we do now in order to live better and eat meat amidst a population boom. “To achieve this without increasing the land under cultivation,” he explains, “we need to improve the efficiencies of crops to transform sunlight into biomass.” Indeed, the ultimate goal is to replace native chloroplast DNA with engineered forms and add in new functions to enhance crop productivity for future generations.

Henry B. John-Alder is a professor and chair of the Department of Ecology, Evolution, and Natural Resources.

A self-described evolutionary and ecological physiologist, Henry John-Alder’s research is generally focused on how animals manage to work and succeed, how they maintain themselves and reproduce in the face of environmental challenges, and how they have evolved to meet these challenges over time.

His most highly cited work surrounds the effects of temperature on the exercise capacities of animals. According to John-Alder, animals either need to maintain a fairly constant temperature or have mechanisms to cope with variations. One of the strategies that evolved is warm-bloodedness, or using metabolism to generate heat and maintain a constant warm temperature. The downside is that this is very expensive energetically and requires that animals eat a large volume of food. Cold-blooded animals, on the other hand, were the subject of John-Alder’s work, in which he examined why even they prefer to be active at a warmer temperature.

He has since turned his attention to the way hormones regulate energy and impact body size in lizards and is involved in a large-scale genomic analysis of testosterone’s impact on growth. And most of the work he’s done has been right in Rutgers’ home state of New Jersey, in the Pinelands. “There’s something about the environment of the lab versus the field that changes the responsiveness to hormonal manipulation,” he says. “A lab is advantageous because you can, obviously, control anything you want. But in the lab you cannot replicate Mother Nature, which causes animals to respond differently. My feeling is that if you want to know how animals respond, you need to analyze them in the field where they live.”

Editor’s Note: this article originally appeared in Explorations Spring 2017. Read more about the AAAS and the requirements for becoming a Fellow.