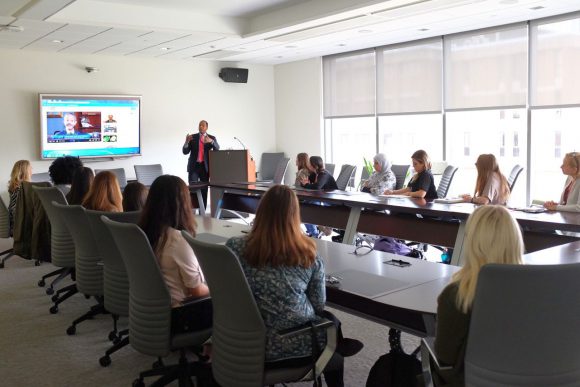 Hill opened up the conversation by asking each guest a question about their passion. The room was filled with students with various majors and each person contributed the reason behind pursuing their specific career path. Hill was charismatic and friendly, allowing for casual conversation to erupt amongst the group, which he later pointed out was his technique on how to get an interview rolling. Hill also shared his three tips on the best way to portray oneself when speaking to the press: speak clearly, be aware of your body language and maintain eye contact. Since the majority of the group’s interest was centered in nutrition, Hill also touched on how to best present reliable nutrition information and how to be regarded as the nutrition expert.

The event ended on a tasteful note. Harvest, the dining venue at the Institute for Food, Nutrition and Health, provided a delicious and healthy lunch. Students gained a valuable lesson on speaking to the press and were eager for another opportunity to learn from Hill’s extensive experience.

Hill has covered numerous stories on New Jersey TV and has also been featured on local and national news programs such as Thirteen/WNET, WLIW21, MSNBC and PBS. He is currently the radio show host of “Newark Today” on WBGO 88.3FM.