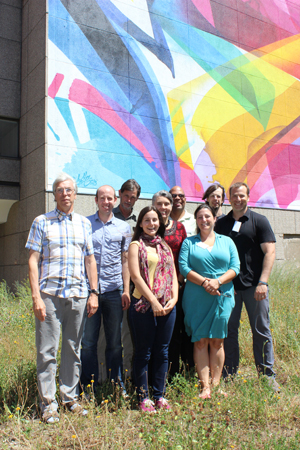 Most cities plan to protect biodiversity yet lack mechanism to measure success.

Myla Aronson, assistant professor in the Department of Ecology, Evolution and Natural Resources, Lauren Frazee, doctoral candidate in the Graduate Program in Ecology and Evolution, Karen O’Neill, associate professor in the Department of Human Ecology, Rutgers alum Dr. Emilie Stander and an international team of urban ecologists, environmental policy experts and city planners recently published a review paper, “Planning for the Future of Urban Biodiversity: A Global Review of City-Scale Initiatives,” in the journal BioScience.

The paper describes the first attempt to characterize the contents of government-sanctioned environmental planning documents from cities across the globe that describe actions or intentions to conserve wild plants and animals in predominantly urban areas. The study also determined whether or not city plans included protections for open green space and street trees in the aim of improving urban air quality, water quality or recreational capacity.

In analyzing 135 planning documents from 40 cities, the researchers showed that city plans most commonly include goals for increasing and improving green space and natural habitat areas, air and water quality, and the benefits that people derive from recreation in green spaces. Most plans, however, failed to include any specific, measurable targets that would enable land managers to request resources and effectively move the planning process forward while city officials and planners would also remain accountable.

A second article, currently being prepared for publication by the team, delves into the associations between city-level attributes and the distinct types of planning documents that emerged from this initial study.

Aronson’s and Frazee’s coauthors are from institutions in South Africa, Germany, Chile, UK, and three states across the U.S. This interdisciplinary research project was jointly funded by the National Socio-Ecological Synthesis Center (SESYNC) in Annapolis, MD, and the Synthesis Centre for Biodiversity Sciences (sDiv) and the Helmholtz-Centre for Environmental Research, both in Leipzig, Germany.