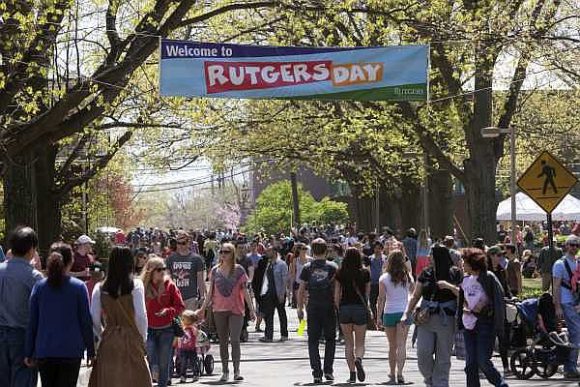 Students and visitors walking about on campus for Rutgers Day.

Rutgers President McCormick was inspired by the festive nature of Maryland Day when he founded Rutgers Day in 2009. But, he built it around a pre-existing annual tradition that has been celebrated on George H. Cook Campus for about a century: Ag Field Day. The history of Ag Field day began as a showcase of scientific and agricultural methods, later welcoming NJ Folk Festival as an accidental neighbor in 1975. In the spirit of convergence, all three events are celebrated simultaneously on the last Saturday of April every year. 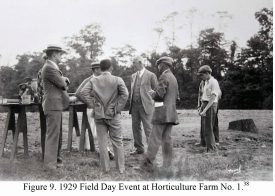 Ag Field Day, originally called just Field Day at least until the 1920s, was created by the State Board of Agriculture (BOA) and moderated by the New Jersey Agricultural Experiment Station (NJAES). Dean of Agricultural and Urban Programs, Mark Robson, shed some light on the purpose of Ag Field Day. “Ag Field Day was originally intended to bring farmers to the university to see the latest research by NJAES: artificial breeding programs, new planting methods or crop varieties. All schools with agriculture had a field day to introduce the community to farmer work. Rutgers Day has built on the traditions of land-grant education,” said Robson.

In August 1906, the first Field Day (the original name for Ag Field Day) was held at the College Farm with roughly 800 people in attendance. Compare this to the record 103,000 that attended Rutgers Day 2017 across the New Brunswick, Newark and Camden campuses. Still, Field Day was considered a great success for its time. In 1917, Rutgers and NJAES assumed responsibility for Field Day and it was expanded to include lectures, demonstrations and tours.

In 1918, the year after its inception, however, the stress of wartime forced Rutgers to cancel Field Day. A tractor demonstration was staged in its place.

When Field Day resumed in 1919 and tractor demonstrations became a staple of the event, in an effort to emphasize farm safety. “Tractor rollovers are an issue on a farm,” said Robson. The Department of Agricultural Engineering demonstrated tractor rollovers using one with a tripod, one wheel in the front and two in the back. The tractor also had an arm that stuck out 45 degrees from the tractor with a wheel on the end. Engineers would put the tractor on an incline until it flipped over. The additional arm would help the tractor right itself. The department displayed many other examples of antique farm equipment as part of their exhibit. Tractor demonstrations were halted in the 1980s out of a fear for patron safety, the reason why attendees don’t see tractor demonstrations today. 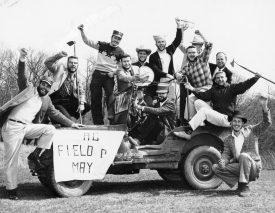 Tractor demonstrations were, however, still a main attraction at Ag Field Day in 1960, as shown in an archival copy of the program, which marked “45 Years of Progress.” (See Editor’s Note below.)* Other mainstay attractions in 1960 were horticulture shows, educational films, lectures and guided tours. A chicken barbecue was only $1.50. 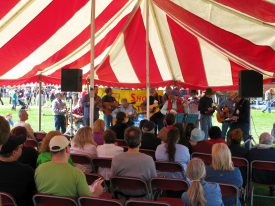 Ag Field Day attendance swelled after 1975 when undergraduate director of American Studies, Angus Gillespie, founded the first annual New Jersey Folk Festival on the same day as Ag Field Day. The festival attracted more than 10,000 people to the Great Lawn of the Eagleton Institute of Politics on the Douglass Campus. Ag Field Day and the NJ Folk Festival became accidental neighbors and were a “happy coincidence,” Gillespie says, because when he started the festival he didn’t know it coincided with Ag Field Day.

“Most Rutgers Day and Ag Field Day events are attempting to introduce Rutgers to the people of New Jersey. The NJ Folk Festival offers something a bit different,” said Gillespie. “The festival introduces the people of New Jersey to Rutgers. The board of directors of the festival selects an ethnic group. The people are visited, interviewed. Students immerse themselves in the people.  The NJ Folk Festival is based on the field work of Rutgers undergraduate students and the relationships cultivated with ethnic groups. The result is a presentation of the people’s traditions and music. In 2017 we presented Turkey’s traditions,” said Gillespie. 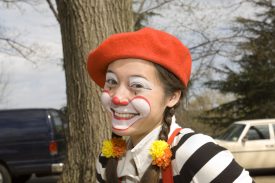 Ag Field Day and the NJ Folk Festival are the foundation of what is now Rutgers Day, a celebration of the revolutionary Rutgers spirit.

“Ag Field Day was intended to bring the people we served to the source. Now, Rutgers Day can bring thousands of people here to see what Rutgers has done to improve the quality of life for the people of New Jersey,” said Robson.

*Editor’s Note: The 1960 staging of field celebrating 45 years of progress. For an event that originated in 1906 and intended as an annual event, there clearly are gaps of several years in which the event was not held including the known cancellation of the 1918 due to war-time pressures.