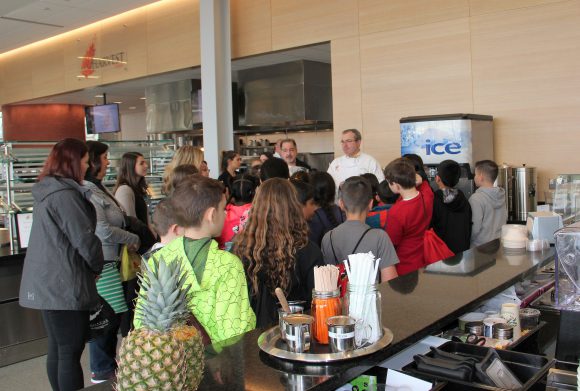 One early spring day this year, a yellow school bus pulled up in a parking lot off Dudley Road on the George H. Cook Campus, and 48 eager fourth-graders debarked to explore the world of higher education.

The students were part of a program of the Old Bridge (NJ) School District called “Kids at College,” an initiative that aims to introduce the possibilities of  higher education to youngsters at an early age and to encourage them to begin preparing to be “college-bound.” The Old Bridge schools partner with a number of universities around the state, and at Rutgers, the Office of Alumni and Community Engagement at the School of Environmental and Biological Sciences organizes the annual visit of the group.

“This program has run for fourteen years,” says Diana Orban Brown, director of the Office of Alumni and Community Engagement, “and each year a new group of fourth-graders tour the campus in amazement.”

This year, the fourth-graders, their teachers and parent-chaperones were split into two groups after they arrived on campus, alternating between the buildings that serve as home to the Institute for Food, Nutrition, and Health (IFNH) and the Department of Marine and Coastal Sciences (DMCS). 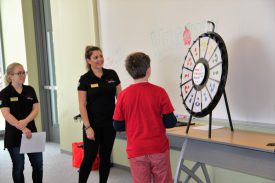 IFNH ambassadors Brenda Borba and Sofia Zois get ready to pose a nutrition question to an Old Bridge student.

The program featured hands-on activities guided by Rutgers’ IFNH student ambassadors and DMCS staff. At the IFNH student ambassadors Brenda Borba, Carly Harris and Sofia Zois (all SEBS ’18) used an interactive prize-wheel game that taught the youths about food, nutrition, exercise, and health. Students spun the wheel. Landing on a question mark meant they answered a nutrition question, while landing on an exclamation point meant students partnered up to do an exercise for 15 seconds, like jumping jacks, jumping rope or hopping on one foot. Each student won their choice of an SEBS drawstring bag, Rutgers magnet, plastic gardening tools or a Rutgers yo-yo as a prize for their participation.

“What resonated with me was how receptive the kids were to learning about nutrition and their ability to relate the information back to their past experiences with food,” said Borba

Another treat was visiting Chef Ian Keith at Harvest Cafe, where he offered them a tasting of whole wheat pizza and fruit-infused spa water. Chef Keith also spoke to the students about healthy food choices and gave them a tour of the kitchen. “The students raved about how tasty the pizza was. They didn’t expect something healthy to taste so yummy,” said Borba.

Meanwhile, at DMCS, marine and glider researcher Nicole Waite introduced the students to her recent research in Antarctica and the Coastal Ocean Observatory Lab (COOL Room), which serves as an observatory and home base for the Rutgers’ fleet of ocean gliders. Also, she played a 10-minute video of glider RU29’s recent mission circumnavigating the South Atlantic Ocean as part of the Challenger Mission.

Afterward, David Aragon, the COOL Room’s research project coordinator, gave the students an up-close-and-personal look at the glider fleet, explaining how they work and how much they cost. “Students related the gliders to docile science submarines that are more cost effective than maintaining a ship,” said Aragon.

“Gliders are long term ocean observing platforms,” said Aragon. They collect ocean data such as temperature, salinity, oxygen, chlorophyll, among other information. Groups discussed obstacles to the gliders during underwater missions, such as sharks, ships, remora and barnacles.

“We get much more data from a glider than if scientists were out in the middle of the ocean on a ship,” said Waite.