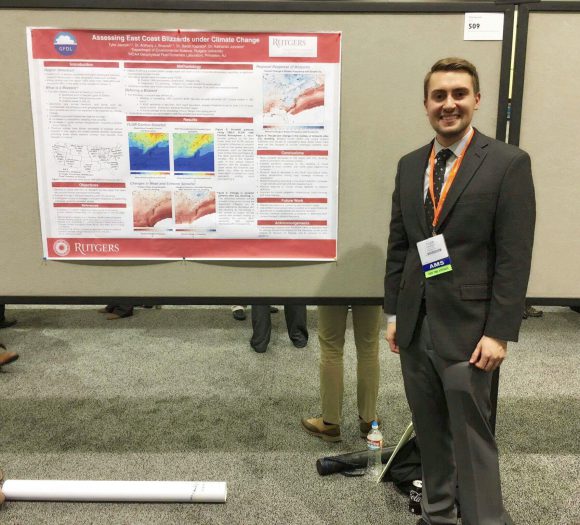 Tyler Janoski is a double major who will graduate in spring 2017 with a bachelor’s degree in both meteorology and marine science, carrying a 4.0 G.P.A. into his final semester at the School of Environmental and Biological Sciences. He’s made a habit of excellence throughout his undergraduate academic career, carefully budgeting his time and money, while commuting 45 minutes each way to campus from Wayne, New Jersey.

He did it to save money, he said, because he paid for school himself. Scholarships that he received, such as the $19,000 award from the NOAA Hollings program in which he participated in the summer of 2016, have helped lighten the load. The NOAA Hollings program paid for most of his junior year and all of his senior year tuition. Close to half of his tuition has been paid by scholarships, proof that academic success can be its own reward.

Janoski is in a rather elite class, as the NOAA Hollings program is a competitive 10-week program for 100 or so of the best U.S. environmental science students, as well as those pursuing other majors relevant to climate change. He completed that internship at Princeton University, which is also at the top of his list of prospective graduate schools.

“For 10 weeks I researched climate change and its effects on extreme weather, specifically snowfall,” said Janoski. He used a climate model to simulate daily weather. “It would snow less on average everywhere in the eastern U.S. if the atmosphere was filled with CO2. The east coast would receive more sporadic, but intense, snowfall and many regions could be hit with blizzards more often,” he explained.

Janoski loved working in a federal lab at Princeton, and participating in the NOAA Hollings program internship confirmed his interest in meteorology research. He learned to ask advice on topics that he wasn’t yet familiar with, a value of collaborative research. The internship at Princeton secured Janoski rewarding connections that he plans to strengthen in graduate school.

Prior to the NOAA Hollings Program, Janoski secured his first internship at Rutgers under the tutelage of his mentor, environmental sciences professor Anthony Broccoli, in May 2014. He first heard his mentor-to-be guest lecture his Introduction to Climate Science class. “Subsequent lectures and hands-on experiences in other classes gave me the confidence to reach out to Dr. Broccoli,” said Janoski.

The internship under professor Broccoli involved assisting Ph.D. student Arielle Catalano with her doctoral research on storm surges. Janoski used computer programming to validate models of wind and pressure to ensure that they were accurate representations of the current climate. Janoski was very grateful for the hands-on experience he got using climate models during this early internship because “most meteorology students haven’t had the opportunity to even touch a climate model,” he said.

Janoski’s first internship was just as rewarding as his later experience in the NOAA Hollings Program, but for different reasons. It gave Janoski the foundational skills that he’d need to become a competent scientist and collaborator. The internship under professor Broccoli taught him programming and the basics of research, as well as how to communicate his findings in group settings, meetings and presentations. Janoski was better able to refine his research, deal with colleagues and superiors pointing out flaws within it, and answer difficult questions posed to him. He often catches his own mistakes before other people do. This meticulous nature has helped him become a better scientist

“The first time I was heavily critiqued was tough. To put so much time and effort into research and then have a respected professor tear it up is difficult the first few times,” said Janoski. But, he takes criticism much better now and checks his ego at the door, especially given the highly public nature of the debate over climate change, where “it’s very important to convince people of your research whether they know science or not.”

Janoski has spent his share in the academic trenches developing a habit of excellence. As a commuter, there was no rolling out of bed to make it to class 15 minutes late. Time management was key for him to earn and keep a 4.0 GPA. The 45-minute commute from Wayne forced him to adapt, condensing his course schedule to a few days a week, whenever possible. “Once I got used to the drive, making my schedule and finding back up plans, it got a little easier,” said Janoski.

Janoski has come to see that collaboration with colleagues is pivotal to successful research. “Tackling any one issue is very hard on your own. There are so many research roles. You’ll need help at some point,” he said. Researchers need others to help with oversight. “There is a need for modelers, programmers and those capable of fixing programs. It is a fundamental team effort.”

The town of Wayne, New Jersey—where Janoski grew up— is famous for its floodplain due to its proximity to the Passaic River. “I couldn’t believe it flooded terribly three times in one year,” said Janoski, as it did when hurricane Irene swept through the area in 2012. In a relief effort, the town bought out destroyed homes on the floodplain to help those displaced. The increase in flooding inspired Janosky to understand why it happened so often to his home town. Being up close and personal to the terrific power of nature sparked his interest in meteorology and his focus sharpened. Climate change and its impact on rainfall became his concern, and is a major reason why he is here at Rutgers.