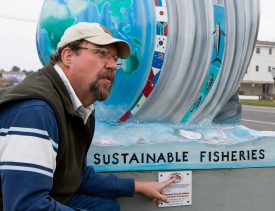 Gef Flimlin displays an educational piece that is part of Barnegat’s “Clam Trail.”

Professor and marine extension agent George (Gef) Flimlin, retired as of January 1 after a career of more than 38 years with Rutgers NJAES Cooperative Extension (RCE) of Ocean County. Flimlin, who worked with commercial fisheries and aquaculturists in New Jersey, began his career in 1978. He formed the East Coast Shellfish Growers Association and initiated the Barnegat Bay Shellfish Restoration Program (BBSRP), a cooperative environmental stewardship program with the NJDEP Bureau of Shellfisheries that educates the public on hard clam, oyster and bay scallops. BBSRP and the “ReClam the Bay” volunteers (graduates of the BBSRP Certified Shellfish Gardener classes) have worked with more than 15 million clam seed, 4.5 million single oysters, hundreds of thousands of oyster spat, and 100,000 bay scallop seed. Working with a supply chain for a community supported fishery in New Jersey and NYC, Flimlin incorporated Jersey Seafood into farmers’ markets and formed a hard clam growers’ cooperative. Flimlin further left his mark both on land and water with his “Clam Trail” program, combining public art and science education on Barnegat Bay. Flimlin also served as the department head for RCE of Ocean County and taught a section of the freshman course, “Perspectives in Agriculture and the Environment,” at the School of Environmental and Biological Sciences.