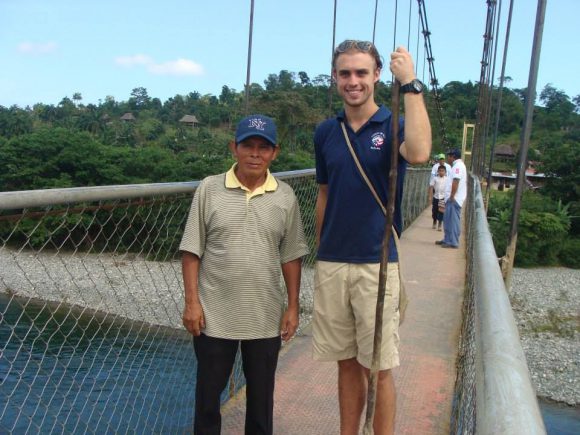 From Rutgers to a remote Panamanian village to a graduate school in London, England: see the twisting and turning path to success taken by one EPH student.

Waking up in London each morning for the past year has been a bit of a dream for K.C. Murray. He attends intensive classes from 9:00am to 5:00pm every day, studying public health topics at the London School of Hygiene and Tropical Medicine. He’ll soon earn his MSc (Master of Science in the UK, equivalent to a Master in Public Health degree in the United States) in Developing Countries and hopes to become an Epidemiologist.

But getting there took many twists and turns, and it might not have happened at all without the Rutgers Environment & Public Health summer program.

The Path to Rutgers and the Developing World 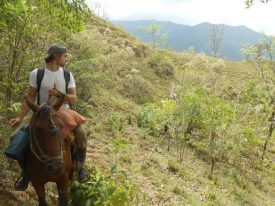 K.C. Murray has always loved the outdoors and appreciated nature and the environment. These passions eventually led him to Rutgers EPH course and beyond.

K.C. grew up in Rahway – an urban area in New Jersey – but his family fostered a love of the outdoors. His father often took him hiking and gardening was a family hobby.

“I’ve been gardening as long as I could walk. Some of my earliest memories are with string beans and tomatoes growing in my backyard,” K.C. said. “It’s an amazing experience getting outside, getting your hands dirty.”

When he enrolled as an undergraduate at Rutgers University, it was only natural that he would get involved with the Rutgers Gardens. “I was the children’s program intern under Debbie Henry, teaching kids from ages 4 to high school about gardening.”

It was also during college that K.C. took his first trip outside the United States to Tanzania. “It was a service trip with the Rutgers Catholic Students Association,” K.C. explains.

The students worked in an HIV clinic, an orphanage and on a building project. “We didn’t work directly in healthcare, but seeing the distribution of wealth and inequality in available health services was eye-opening.” The experience inspired K.C. to want to learn more about health and consider a career working in developing countries.

Although he started out at Rutgers as an environmental engineering major, a course in human ecology led him to switch to the EPIB (Environmental Policy, Institutions and Behavior) major. “I discovered I loved the policy side more than the engineering side,” he said.

It was through his public health minor that K.C. landed in a class taught by Peter Tabbot, health officer for the Rockaway Township Division of Health, and where he learned about the summer Environment and Public Health (EPH) program. Professor Tabbot also teaches in the EPH program. 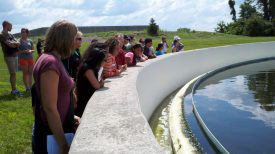 K.C. (far left) and his EPH classmates get a firsthand look at wastewater treatment. The knowledge K.C. gained during the EPH course, field trips, and internship helped him land a job and get accepted into the Peace Corps and a Master’s program.

K.C.’s experiences at Rutgers resulted in him taking two life-changing actions in 2011: applying for the EPH program and the Peace Corps.

The Environment & Public Health (EPH) program consists of a 7-week intensive summer course followed by a 200 hour field training internship with a health department. It provides students with the expertise and hands-on experience needed to sit for the NJ state exam to become a licensed Registered Environmental Health Specialist (REHS).

Deepening his understanding of epidemiology and learning new topics in EPH that were not covered in his undergraduate curriculum helped to not only expand his skills but bolster his resume.

Having the opportunity to apply the classroom training in his internship at the Monmouth County Health Department in Freehold helped him further cement his knowledge.

“I absolutely loved it,” K.C. says of his internship. “They [Alice Cadotte, Sr. REHS, and Kate Matthews, REHS] taught me an amazing amount about environmental health. I thought I was just going to get a few pieces, but I was able to go out with everybody from the entire department and see all the aspects.”

K.C. credits the strong foundation he received in the EPH program (in only twelve weeks!) with opening doors that have helped his career in many ways.

For one, it helped him land his first job out of college as an environmental scientist with Brennan Environmental, Inc. in Summit. His knowledge of wells and well construction – learned solely in the EPH program – was a huge factor in getting the position, which involved delineation of petroleum-contaminated sites for remediation. 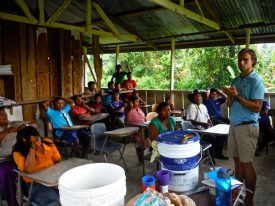 K.C. Murray speaking to the village about sanitation and the role it plays in disease prevention.

Second, after an excruciatingly long wait, K.C. finally received a response from the Peace Corps: he was accepted! Although he had no previous public health work experience, the EPH program and internship gave him the background that led to an environmental health volunteer position in Panama. He left his job and moved to Panama in June 2013.

Last, K.C. was accepted into the London MSc program in 2015, in part, because EPH had broadened his epidemiology understanding and given him new knowledge in topics like foodborne illness and microbiology. “Putting this [EPH] on my resume definitely helped me get into the program,” K.C. said.

Someday, K.C. hopes to return to Central America to do development work there. But his next adventure awaits at the World Health Organization (WHO) headquarters in Geneva, Switzerland. He is completing an internship with an epidemiologist who focuses on cardiovascular diseases in lower-middle income countries in WHO’s Office of Management of Noncommunicable Diseases. Ultimately, Murray hopes to return to the States to gain even more practical experience working under an epidemiologist.

“I want to develop a stronger background in the science of epidemiology,” K.C. said. Eventually, he expects to apply to doctorate programs to learn more about policy and intervention work in the developing world.

“EPH set such a strong foundation in public health and has led me on a great path towards a career in epidemiology,” K.C. said. “I attribute a lot to that class.”

Life in The Peace Corps

K.C. spent two years in Kuite (pronounced Kwee-tay), a remote, indigenous community in Panama and a three-hour boat ride from the nearest car, electricity or modern amenities. He was welcomed by the Ngobe (pronounced No-bay) people, who had no sanitation systems and were experiencing high mortality rates in children from diarrhea.

As is required, K.C. spent the first three months in an “integration period,” learning the culture, the language and the food.

“The locals eat lots of fish, chicken, rice, beans, lentils, vegetables, and… SPAM. Lots of SPAM,” K.C. laughed. Although K.C. identifies as “mostly vegetarian,” he ate what was offered to him.

“Now that I’m back in the developed world,” he confessed, “if I ever eat meat again, it will likely be SPAM – I became very fond of it!”

Getting Down to Work 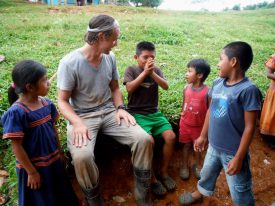 K.C. spent two years in a remote, indigenous community in Panama, serving in an environmental health volunteer position with the Peace Corps.

After the integration period, K.C. recruited members of the community to help him devise a solution to their sanitation problem. Based on the land and other variables and limitations, they chose to build composting latrines. The only downside of this choice is that composting latrines require additional funds for the equipment and supplies necessary to build them – funding the Peace Corps doesn’t provide. So K.C. had to write a grant to support the work.

While he waited for the financing, K.C. spent his time educating the community on the importance of sanitation and its connection to the disease and death they had been experiencing.

“When it comes down to it, it’s impressive to build a composting latrine, but if people don’t have hand washing down – especially children, who need to get that ingrained as a habit – that’s key,” K.C. explained.

A composting latrine is an above-ground cement structure that requires the soil pH and other factors to be just right to function properly. Even more daunting, each latrine requires about 800 cinder blocks to build. To acquire the cinder blocks, K.C. and the community members had to take a 3-hour boat ride (each way) to the nearest hardware store. The small boat could only hold about 200 blocks – requiring four six-hour round trips to get all the materials needed for just one latrine.

Soon after starting the monumental effort, K.C.’s luck changed. On one of his trips to the hardware store, he was introduced to a man who knew how to make cinder blocks. The man taught K.C. how to make them and even gave him a mold he had fabricated.

K.C. learned he only needed cement, gravel, and water to make the blocks. Lying next to a river, Kuite had an ample supple of the latter two components. Now, trips to the hardware store could focus on buying smaller – and cheaper – amounts of the remaining vital ingredient: cement.

With his newfound knowledge, K.C. presented a seminar to the community to teach them how to make the cinder blocks on their own. After doing some economic analyses, K.C. determined that every homemade cinder block was $0.10 cheaper than store-bought blocks and they were saving at least $400 on boat trips alone. More importantly, the indigenous people now had the capacity to continue building these on their own. And they could apply their newly acquired skill – masonry work – to future building projects – housing, sanitation, or otherwise. 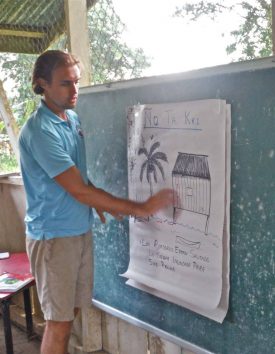 By teaching the Kuite people how to build composting latrines, K.C. upheld the Peace Corps’ vision to empower locals and foster self-reliance.

During construction, K.C. assigned roles to community members (engineer, technical manager, assistant) and changed those roles regularly, ensuring that everyone learned all aspects of the job. K.C. started by showing them, then stepped back to let them do the work themselves, ever aware of the Peace Corps’ vision to empower locals, foster self-reliance, and ensure that their solutions are sustainable long after volunteers have gone. They built 8 compost latrines during his time there, and the locals have continued building more since his departure.

With his departure, K.C. was to be the last Peace Corps volunteer in Kuite. But one thing K.C. learned in EPH that he applied to this experience was the importance of inspections and follow-up. There are many things that can go wrong with a composting latrine and only through follow-up testing and inspection by a trained individual can those issues be identified and remedied to ensure that the project really is effective and sustainable. K.C. successfully lobbied the Peace Corps to install one more volunteer in Kuite to carry out this final but important phase of the project.

Editor’s Note: This story originally appeared on the website of the Office of Continuing and Professional Education.