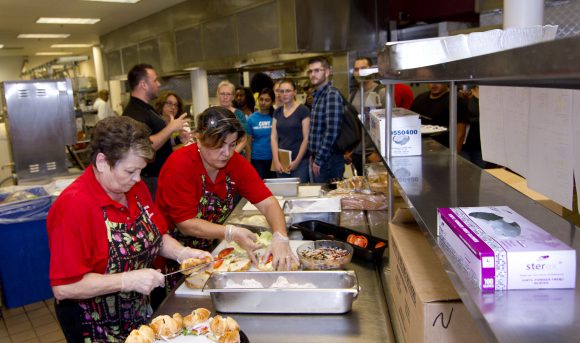 Learning about the U.S. food code was a valuable part of the EPH program for students Gary Dorsi and Percy Pingpoh. This photo depicts EPH students taking a field trip to a Rutgers University dining hall to see the real-world applications of the food safety principles they study in class. 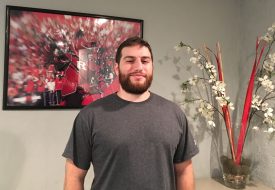 Gary Dorsi loves working at the ground level of a young start-up company. “There are lots of opportunities to learn and gain great work experience here,” he explained. But without a few key decisions, Gary’s career could have easily headed in a very different direction.

Narrowing His Focus: From Biology to Food Science

When Dorsi graduated from Rowan University in 2012 with a degree in Biology, he wasn’t certain where to go next. He soon realized that he “needed more specialized education” and enrolled in a food science graduate program, with a focus on dietetics. That’s when he heard about the summer Environment & Public Health (EPH) program at Rutgers University. He was intrigued by the public health aspect of what he was studying. “I realized I had a passion for food safety that I really wanted to pursue,” Gary recalled. The streamlined EPH program – which compresses large amounts of education and field work into a relatively short period of time – sealed the deal for Gary, who was anxious to start his career. 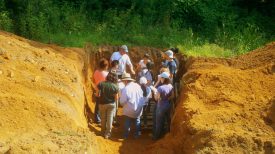 Hands-on lessons in the soil pits were one of Dorsi’s favorite parts of the EPH course!

During the summer between his two years of graduate school at Montclair State University, Dorsi enrolled in EPH. A hands-on learner, Gary particularly enjoyed the components that were interactive and out in the field.  “I liked when we went out into the soil pits and got to do soil excavation,” he said. “Having a strong science background really helped me in the course, because the basic concepts were all scientific in nature. It’s a lot of work, but it’s worth it to get into a public health career.”

After the classroom portion of EPH ended, Gary was placed in an internship with the health department in Bloomfield, New Jersey, under Health Officer Mike Fitzpatrick. “I got really, really lucky. It’s a great township, a great working environment, really nice people,” Gary recalled. “You are exposed to all sorts of things – food inspections, nail salon inspections, pool inspections, lead inspections, nuisance complaints, court cases. I was sent to a neighboring community they had a service contract with for septic inspections. I was exposed to pretty much everything!”

The experience that summer in EPH also led him to switch his food science master’s degree program from dietetics to an emphasis on food safety.

Getting His Foot in the Door at Gel Spice

As his graduate studies wound down, he completed a hands-on practicum field course at the Gel Spice Company in Bayonne. Pronounced with a hard G, the name Gel Spice may not be familiar to some, but the family-owned company’s products are found in many stores. “They produce a variety of spices, under contract, under their own label, and under private labels sold widely,” Dorsi explained.

Once he had his master’s degree in hand, Dorsi was hired by Gel Spice to manage their sanitation program. His job responsibilities were wide ranging. “I wrote Sanitation Standard Operating Procedures (SSOPs) and other SOPs, managed daily sanitation operations, handled customer complaints, and, as a certified auditor, I oversaw their validation and verification programs, performing those audits.”

A little less than a year later, Gary was recruited by Blue Apron, the leading fresh ingredient recipe and delivery service in the U.S. The provider of ready-to-cook-at-home meal kits was growing and looking to expand its sanitation staff. “I was hired to be a Sanitation Supervisor in Blue Apron’s Jersey City facility to oversee all environmental work,” Gary said. In his role, Dorsi focuses on ensuring that Blue Apron exceeds all food safety regulations.

Gary knows that to keep his skills sharp, his licenses and certifications active and his promotion opportunities open, he has to invest in his own continuing education. With that in mind, he completed the Rutgers HACCP Plan Development course in 2016.

“If hazard analysis is your job, you need the skills taught in [the HACCP] class,” he said. “It teaches you how to think outside the box.”

His employer also makes it easy. “There’s an emphasis on staff training at Blue Apron, which really helps.”

The future is looking bright for Gary Dorsi. He hopes to move up to a Food Safety Supervisor position where he will have broader oversight of sanitation, including pest control and other related issues. “I love working at Blue Apron,” Gary said. “They have a great culture and they offer good perks.” 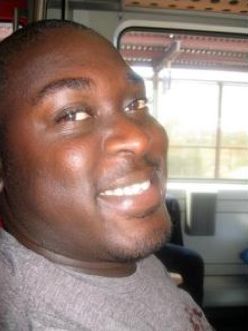 Growing up on an Agricultural extension farm in Cameroon in the 1980’s, Percy Pingpoh couldn’t have predicted that his future would include a career in the United States with an innovative online meal service company. But, after an unexpected detour, a leap of faith, and lots of hard work, that’s exactly what happened.

From the Family Farm to a New Life in the US

After earning a business degree from the University of Buea in Cameroon, Pingpoh returned from college to work on the family farm. “We produced peanuts, beans, and maize, and sold it to local markets. I worked for three years doing the day-to-day business operations and management with my dad.”

But Percy felt his agricultural skills were lacking, so he enrolled in a master’s degree program at the University of Hohenheim in Germany, taking classes on food, farms, and environmental topics.

His farming career plans soon took an unexpected detour. While he was studying in Germany, he met and began dating Donna, a fellow student. They fell in love and instead of returning to Cameroon after graduation in 2010, Percy joined Donna in the US. They married soon after.

A Leap of Faith Leads to EPH

Percy’s first job was in environmental services. It was when his company sent him to an OSHA 40-hour HAZWOPER training program sponsored by Rutgers OCPE that Percy came across the Environment and Public Health (EPH) program. That was a turning point.

“I realized my agriculture background and food knowledge could be much more relevant in my career if I went through the EPH program, [rather] than continued doing what I was doing,” Percy recalled.

However, when he saw the enrollment requirements, worry set in. He feared his foreign degrees wouldn’t be accepted and began making plans to retake undergraduate science courses. He contacted the EPH program coordinator, Dalynn Knigge, for guidance just in time. She assured him that he didn’t need to start his academic career over; he simply needed to have his foreign transcripts evaluated and converted to US equivalents by a recognized service, like World Education Services. He did, was found to be eligible, and enrolled in EPH in 2014.

“It was a leap of faith – a big change in my career path,” Percy said. “The program opened my horizons and career options. It opened my eyes.”

Meeting and interacting with professionals in the field was another valuable component of the program. “Talking with them one-on-one during breaks and being able to ask them questions to learn more – I really appreciated that,” Percy said.

When the classroom portion of EPH ended, Percy completed his field training internship with the City of Paterson under Chief Registered Environmental Health Specialist (REHS), Violeta Good. “She was very nice. She taught me a lot about the job, helped me get out in the field, exposed me to a lot of relevant issues and helped me meet professionals.”

Another positive aspect of interning in Paterson was being exposed to commercial food operations, which would prove to be particularly useful to Percy in the future. “They don’t just inspect restaurants. Some of the health inspectors were inspecting large food production facilities,” Percy recalled. “It was great to see how it’s done, what they look for.” 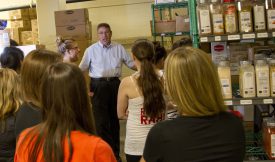 With the foundation he received in EPH, Percy was well-prepared to meet the challenges of his position at Blue Apron and enjoys the creative working environment there. In this photo, students go behind the scenes at a Rutgers dining hall to learn about food safety.

After he completed EPH, Percy was offered a job as an SQF practitioner – a food safety quality assurance role – at Dell’s Maraschino Cherries, a family owned company in Brooklyn. He enjoyed the work and learned a lot there, but the commute to Brooklyn began taking its toll. When a position at Blue Apron in Jersey City opened up, Percy jumped at the opportunity.
Percy was immediately impressed with Blue Apron. “I have never seen so many smart people in one place – across all the different departments.”

As a Food Safety Supervisor for Blue Apron, Percy is helping the growing company develop robust food safety programs. “I assist with Good Manufacturing Practices (GMPs), pest control, sanitation, and environmental monitoring,” Percy said. “I have some specialists under me and I work with my manager. There is a lot of collaboration and teamwork involved in keeping the food safe.”

The experience in EPH enabled Percy to do his job better than he could have expected. “In my opinion, you need to have a broad, diverse background to work effectively in this field. EPH really prepared me for that. EPH covers EVERYTHING from wastewater to septics to food safety.”

Percy is also involved in hiring food safety specialists for Blue Apron, and his experience in EPH gives him an edge in evaluating candidates. Percy values the diverse background that EPH gave him and looks for that type of comprehensive understanding in potential job applicants. “EPH gives you the broad knowledge you need, which is very important for ensuring safety in a large food production facility.”

After the excellent preparation Percy received from the EPH program, he enjoys the work he’s doing now at Blue Apron. “It’s a great environment – you are pushed to think outside of the box to solve problems,” Percy said. “Of course there are rules and regulations that you must follow, but they encourage you to figure out different ways to do it. They let you be creative in how you approach and solve problems. It’s exciting to work in that kind of environment.”