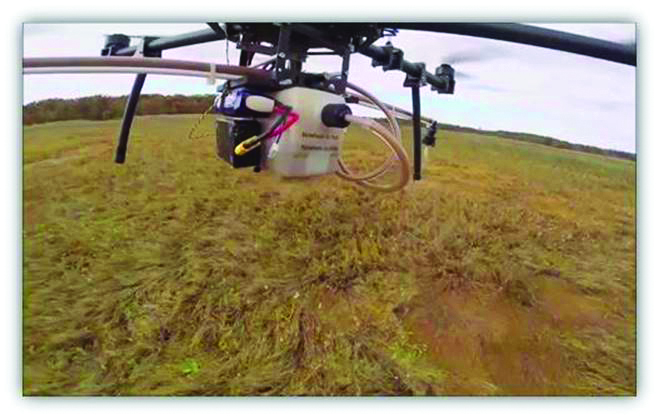 In 1930, Rutgers University made the world’s first aerial application for mosquito control. These early experiments were ridiculed as ‘pie-in-the-sky’, but by 1947, a million acres of mosquito habitat were being treated annually by air. Today we stand at the edge of another technological revolution with transformational promise for mosquito control: unmanned aerial systems (UAS), that is, robotic aircraft or ‘drones’ controlled by computers. As we are increasingly challenged to diminish pesticide use for mosquito control, UAS offer potential for precision mosquito control. Local mosquito control agencies will use this emerging technology to target narrowly-defined areas, applying insecticides precisely where needed, thereby reducing time, money and environmental impact.

Rutgers has constructed several experimental drones for mosquito control, including a heavy-lift hexacopter built on a carbon-fiber airframe for less than $5,000. The aircraft are lifted and propelled by multiple electric motors and are virtually maintenance free. These ‘skeetercopters’ are equipped with an array of equipment, including sonar, barometer, magnetometer, gyros, camera, accelerometers, GPS, telemetry and more. A mission planner permits setting point-and-click GPS waypoints so missions are executed entirely autonomously including takeoff and ‘return to launch’ landing. 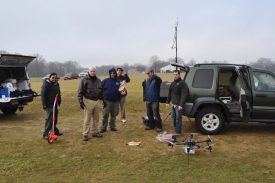 Research is focused on developing UAS capability to contribute to multiple precision mosquito control functions, including spraying, surveillance, and mapping. Prototype modules are fabricated in the “Fab Lab” to support each of these essential mosquito control functions aided by a cutting-edge 3D printer. For example, the most obvious application for UAS is using a camera for a bird’s-eye view of larval habitats. This has been taken a giant step forward with a waterproof drone for use in difficult to access areas (such as salt marshes) where the drone can land on mosquito pools to capture real-time video images and determine whether an insecticide application is necessary. The larvicide sprayer module is regulated by a motor controller integrated into the flight controller so that flow rates are automatically adjusted to flight speed. The flight controller permits sprayer actuation to be triggered by GPS waypoints for accurate targeting. A net module offers a fast and efficient means of monitoring adult mosquito populations, permitting surveys of otherwise inaccessible or obstructed areas.

Rutgers, designated one of six national Federal Aviation Administration (FAA) test sites to help integrate unmanned aircraft into the national airspace, has established a UAS center and is poised to take a leadership role in the state. Its efforts are led by Randy Gaugler, distinguished professor, Department of Entomology and director of the Rutgers Center for Vector Biology (CVB). Greg Williams, superintendent of the Hudson Regional Health Commission and a CVB member, is the chief engineer responsible for drone design and construction. Scott Crans, CVB, and Isik Unlu, Mercer County Mosquito Control and CVB, direct field experimentation. Additional partners include Shaun Kenny, Department of Mechanical and Aerospace Engineering, and Yi Wang and Devi Suman, CVB.