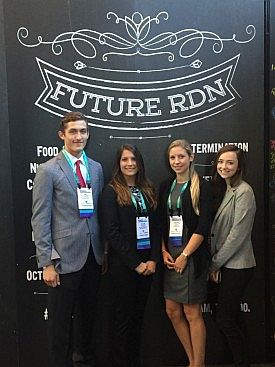 The faculty and students associated with Dietetics, one of the options in the Nutritional Sciences Program at the School of Environmental and Biological Sciences, have had an amazing year! Peggy Policastro, nutritionist at Rutgers Dining Services and director of Behavioral Nutrition and the Student Ambassador Program was selected to receive the Mary Abbott Hess Award from the Academy of Nutrition and Dietetics in October. Barbara Tangel, director of the Didactic Program in Dietetics, was awarded the Carolyn Sebastianelli Distinguished Member Award by the New Jersey Academy of Nutrition & Dietetics (NJAND). And Chris Gunning, nutritionist, Rutgers Health Services, and program leader, Health Information Technology for the 21st Century, was recognized by NJAND as the 2016 Emerging Dietetic Leader for the State of New Jersey. Not to be outdone by their professors, 100% of the student IFNH (Institute for Food and Nutritional Health) Ambassadors were placed in their dietetic internships, when national placement averages about 50%. Two of the ambassadors were honored with awards and one completed a George H. Cook Honors Thesis! 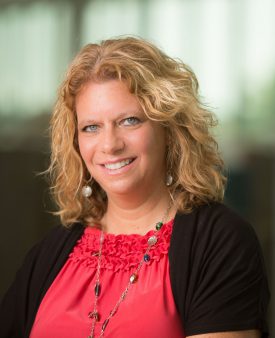 The Mary Abbott Hess Award is given for ‘Recognition of an Innovative Food/Culinary Effort’.  It’s given to encourage dietetics professionals to make original and innovative efforts in food and culinary education, and Peggy Policastro—this year’s recipient—is the epitome of original and innovative. Her childhood passion for cooking did not result in her becoming a chef; instead she earned a degree in psychology and discovered dietetics. Her intense curiosity about what people eat and why they eat it led her to a career as a registered dietician and the pursuit of a master’s degree at Rutgers. Soon after that, a call from the chair of the Department of Nutritional Sciences  led to the creation of a dining program that marries student food service with nutritional consultation and an academic component. Rutgers Dining Services, led by Joe Charette (CC’73) and bolstered by Policastro, is a leader among universities across the country in promoting healthy eating and providing the menus that support that pursuit. Possibly because of the influence of this new approach to student dining, Policastro decided to go for a doctoral degree, a first-of-its-kind Ph.D. in interdisciplinary studies-nutritional science and psychology, which she completed in 2015. Policastro continues to pursue innovative projects, including the startup of Harvest, the café at the IFNH. Along with chefs Ian Keith and Rachel Ruben, they’ve set out to prove that nutritious food can be a delicious and desirable alternative for grab-and-go fast food choices.

The Carolyn Sebastianelli Distinguished Member Award, given by the NJAND, honors a member who has been a role model, demonstrating commitment to the nutritional needs of the community, leadership, mentoring, service to others, and professionalism and high ethical standards in practice. With over 40 years of employment in the same department and a deep commitment to her students, Barbara L. Tangel represents the kind of person for whom this award was created.

Tangel has been a faculty member at Douglass, Cook, and University colleges; the College of Nursing in Newark and currently at the School of Environmental and Biological Sciences. She has provided service to the department, school, university and the community as a teacher, a registered dietitian, nutrition consultant to the Visiting Nurse Association in Middlesex County and the Woodbridge Health Department. Tangel has served as an academic advisor, associate director of the Healthy Dining Team, and since 2008, as a nutritional sciences advisor to incoming freshmen.

Tangel’s greatest contribution and impact upon the department and the university began in May 2000 when she became the director of the Didactic Program in Dietetics (DPD), where she has been responsible for planning, organizing and directing the activities of the program including data collection, program management and administering the accreditation process. Under her watch, the program has received a commendation from the Accreditation Council for the Education of Nutrition & Dietetics (ACEND) for its continued pass rate of greater than 90% on the National Registration Examination for Dietitians, a required measure of program success.  And in the past two years, the pass rate for first-time Rutgers test takers has been 100%!

In addition to the outstanding pass rate of Rutgers DPD graduates on the National Registration exam, for the majority of Tangel’s tenure as DPD Director, the percentage of program graduates/seniors that were matched to the extremely competitive dietetic internships has exceeded the national average.

Tangel has been a dedicated and diligent teacher, advisor, supervisor, and mentor and has successfully built a curriculum with a strong academic reputation. 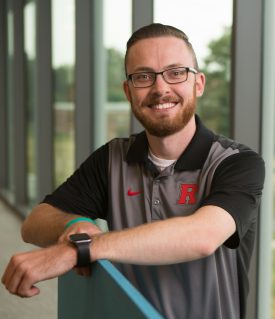 Only one member of NJAND is recognized each year with the 2016 Emerging Dietetic Leader for the State of New Jersey, and that member was Christopher Gunning (SEBS’11). This award is presented to those who are at the beginning of their dietetics careers and who support the promotion of optimal health and nutritional status of the public through leadership in legislation, research, education, management, and other areas related to the profession. A 2012 graduate of the Dietetic Internship Program at the Rutgers School of Health Related Professions Gunning currently serves as the clinical nutritionist for Rutgers Student Health Services and was the first clinical nutritionist hired jointly by Rutgers Student Health Services and the IFNH.

He has helped to build the current nutrition counseling services offered to the undergraduate and graduate students of the Rutgers New Brunswick campus, a service that was not offered prior to his hiring. Gunning has been actively involved in many professional associations, both as a student and as a professional. For NJAND, he has served as an executive board member for four years, the Region One co-chair, member of the awards committee and currently as the web chair. He is current chair of the National Organization of Men In Nutrition (NOMIN), where the mission and goal is to promote dietetics careers to all males and to support members in the field to grow professionally through an online community. Currently, males only represent 3.8% of all registered dietitian nutritionists across the country. Gunning was involved with the Academy of Nutrition and Dietetics’ “Men In Nutrition” video, filmed here on campus last fall to help promote exactly that. Since its release, this film has been distributed nationally to high schools across the country and viewed by thousands of students to help promote nutrition and dietetics as a viable and rewarding career path for young male students.

Gunning is also very passionate about technology and finding ways to intersect new and emerging technologies with nutrition counseling and education to help improve research and patient/client compliance and outcomes. This is one of the primary focuses of Health Information Technology for the 21st Century (HIT 21) thematic program at IFNH for which Gunning serves as the program lead.

Policastro, Tangel and Gunning have set the bar high and the students in the Dietetics program have proven themselves worthy! Dietetic internships are an essential part of the education that a Registered Dietician must complete and the internships are very competitive with only 52 percent of students finding a match nationally. One hundred percent of the student IFNH Ambassadors were placed, with Taylor Palm being matched to Sodexo-Allentown Dietetic Internship, and Bill Cornelius, Cortney Flynn and Rebecca Tonnessen being matched to the Rutgers University Dietetic Internship. 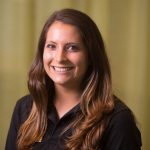 Taylor Palm was named New Jersey Outstanding Dietetic Student in a Didactic Program at the NJAND Annual Meeting in May. This prestigious title is awarded to only one student in New Jersey. The award is based on college and community achievements, honors and awards, for which Palm has achieved many during her tenure as an IFNH Student Ambassador. From working with former Pastry Chef of the White House Bill Yosses on a cooking event for children to presenting research twice at the national Food and Nutrition Conference and Exhibition (Houston, TX, in 2014 and Nashville, TN, in 2015), Palm has showcased her many talents. Palm graduated from Rutgers in January 2016 and has remained active in the field of nutrition, volunteering at the RWJUH Outpatient Pediatric Department. 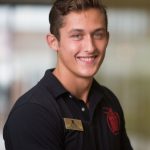 William (Bill) Cornelius was honored with the title of Rutgers Student Employee of the Year-Third Place at the 2016 Student Employee of the Year Celebration Luncheon held in April 2016. Cornelius was nominated for the award due to his stellar leadership work as an IFNH Student Ambassador and his never ending enthusiasm in all activities ranging from representing the IFNH at high profile events, nutrition education activities in the dining hall—including initiating the Meatless Monday campaign—and research presented at the Aresty Undergraduate Research Symposium and the 2015 National Food and Nutrition Exhibition in Nashville, TN. 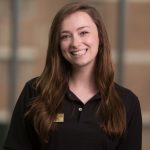