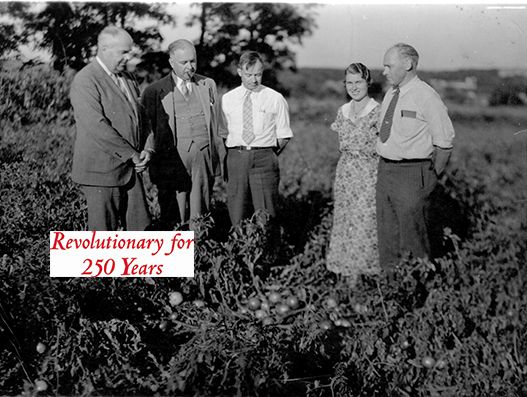 Rutgers Revolutionary Lyman Schermerhorn (left) breeder of the ‘Rutgers’ tomato in a field of tomatoes (circa 1930s).

Lyman Schermerhorn developed the Rutgers tomato in 1934 which turned out to be the leading commercially grown tomato variety of the mid-20th century. Schermerhorn, who was appointed as vegetable specialist in 1914, and worked on asparagus and rhubarb breeding, began the breeding of improved tomato varieties in 1926.  This new variety ripened from the inside out—so that when the fruit was red on the outside, it was ripe and colored throughout. It had disease resistance of and a delicious balanced flavor. Not only was Rutgers a top performing tomato for New Jersey’s processors, from Campbell Soup, Heinz, Hunt, and Ritter to smaller companies, but the Rutgers tomato continued to be a preferred choice of commercial growers through much of the mid-twentieth century. Visit: https://sebsnjaesnews.rutgers.edu/2016/04/whats-in-season-from-the-garden-state-revolutionary-for-250-years-the-historic-rutgers-tomato-and-its-re-invention/