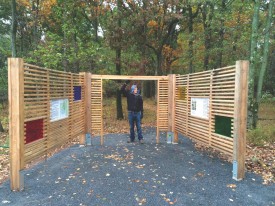 The Kontos Memorial Kiosk at the Rutgers EcoPreserve was designed and constructed by Brian Curry (SEBS ’12).

Charlie Kontos, Jr. loved wild places and all forms of wildlife. In fact, he was the first person to document and verify the return of the fisher (Martes pennant), part of the weasel family, to the woods of New Jersey after its extirpation in the 1900s.

Kontos passed away in 2010 while in the process of completing the doctoral program in the Department of Ecology, Evolution and Natural Resources (EENR). In his memory, his family dedicated a gateway kiosk on the 400-acre Rutgers Ecological Preserve. The kiosk leads to a new set of trails that students and others can access conveniently from the Livingston Campus. The Kontos Memorial Kiosk was designed and constructed by Brian Curry (SEBS‘12), with help from EcoPreserve Faculty Director Rick Lathrop, professor of environmental monitoring in EENR and director of the Grant F. Walton Center for Remote Sensing and Spatial Analysis (CRSSA) on the G. H. Cook Campus. Lathrop was named the inaugural holder of the new Johnson Family Chair in Water Resources and Watershed Ecology in December 2015.

The core of the preserve is a mature forest of oaks—some over 150 years old—supporting habitat for a diversity of wildlife, and more than 7.5 miles of trails used by hikers, bikers and nature enthusiasts. Generations of Rutgers students have also used the EcoPreserve as a natural laboratory for science and humanities education and research. 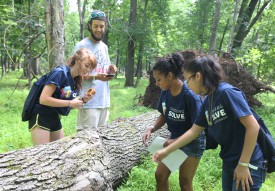 This was very much the case when SuperStorm Sandy swept through New Jersey toward the end of October 2012, when the mature trees in the preserve were still in full summertime leaf and carrying a lot of surface area. As Lathrop describes it, this made the trees vulnerable to windthrow and dozens of them were toppled. Immediately after the storm, several students in a natural resource management class taught by Lathrop used global positioning systems to locate the fallen trees. Their goal was to begin an inventory of the damage and create a database for future use.

A Pipeline for Future Students

Rutgers 4-H has been working with New Jersey public schools to enhance science learning through enrichment programs and clubs, and for the past three years, has used the preserve as a teaching tool for urban high school students enrolled in the Rutgers Summer Science Program. Sponsored by the Samsung Corporation since 2013, this Rutgers program is an enrichment experience for pre-college youth. The goal is to spark their interest and improve their competency in STEM (science, technology, engineering and mathematics) education. 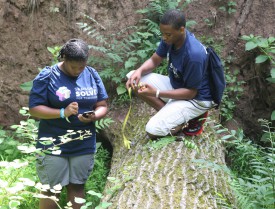 The EcoPreserve was a perfect living laboratory to teach them about conservation and the environment. So, under the direction of Lathrop and with coaching from Rutgers students who serve as EcoPreserve land stewards, the high schoolers spent one day during each of the last three summers scrambling over fallen trees and adding to the inventory started by the Rutgers students. Back at the CRSSA lab, they were taught how to compile, map, and visualize their data, creating a mapped distribution of downed trees that is forever part of the EcoPreserve’s database. Their work will be used as a baseline to compare with future vegetation inventories.

And these budding scientists—all potential Rutgers students—learned invaluable lessons about forest regeneration, ecology, and restoration in the interactive, outdoor classroom of the Rutgers Ecological Preserve.

Editor’s Note: This story first appeared in the Fall 2015 issue of Explorations, a publication of the Rutgers School of Environmental and Biological Sciences.