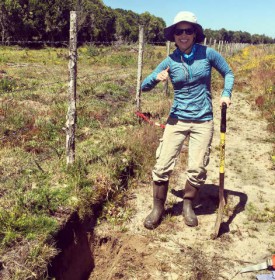 Post-doc Tina Dura explores the coastal sediment layers in northern Chile, one of the sites that have preserved evidence of the 2015 tsunami.

Tina Dura, post-doc in the Department of Marine and Coastal Sciences, recently completed fieldwork documenting the various ways in which the 2015 Illapel earthquake and tsunami along the Chilean coast altered the coastal environment.

Dura, who is part of Prof. Ben Horton’s Sea Level Research Lab, was awarded an $18,000 NSF Rapid Response Research (RAPID) grant to conduct this research. She and a team of coastal geologists from the U.S. and Chile visited three coastal wetland sites that have preserved evidence of the 2015 tsunami.

The team mapped the tsunami deposit for thickness, structure, buried vegetation, inland run-up, among other factors,  at the three sites. The scientists also collected samples to characterize the sedimentology and microfossil content of the deposit. This data will shed light on how tsunami deposits are preserved in coastal sedimentary sequences and how they can be better identified in the fossil record. The run-up measurements of the tsunami will also be used to calibrate model simulations of the 2015 event in order to improve prehistoric tsunami model solutions.

The team also found possible paleotsunami evidence in the same coastal wetlands where they mapped the 2015 deposit and discovered up to three additional sand beds interbedded within coastal marsh peats. According to Dura, this is an exciting find in north central Chile where no paleotsunami evidence has ever been described.