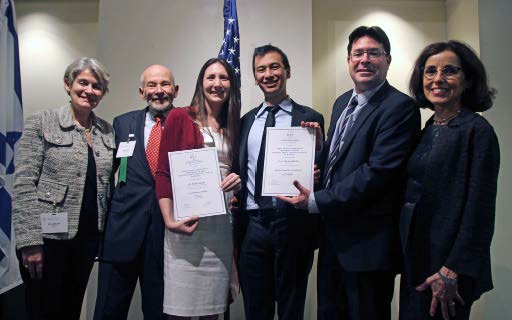 Diane Adams, assistant professor in the Department of Marine and Coastal Sciences, received the 2015 Bergmann Memorial Award, which recognizes promising young scientists who are recipients of new grants from the United States-Israel Binational Science Foundation (BSF). This award, which comes with an additional $5,000 award over the value of the grant, was established in February 1976 to honor E.D. Bergmann, an organic chemistry researcher who played a leading role in establishing the BSF.

Adams is engaged in ongoing research on “Coral Biomineralization” with Tali Mass, former Rutgers postdoctoral fellow who is now a professor at the University of Haifa, Israel. Mass is also a 2015 Bergmann Memorial Award winner, and evenly shares the research grant of $150,000 with Adams for their joint project. Their research on understanding how corals make their very first skeletons in different climates, will focus on the expression and function of highly acidic proteins found in corals from temperate to tropical waters. These proteins were first discovered in the lab of Paul Falkowski, distinguished professor in the Department of Marine and Coastal Sciences and inaugural Bennett L. Smith Chair in Business and Natural Resources.