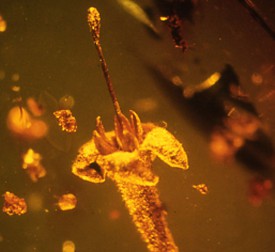 Lena Struwe, associate professor in the departments of Ecology, Evolution and Natural Resources, and Plant Biology and Pathology, identified a new flower species, Strychnos electri, discovered trapped in amber by entomologist George Poinar from among hundreds of specimens unearthed from an amber mine in the Dominican Republic in 1986. The two flower specimens, estimated to be at least 15 million years old, are extinct relatives of many flowering plants still alive today. Struwe coined the species name in honor of its amber origin, since elektron is the Greek word for amber. The new species is described in a paper published by Struwe and Poinar, professor emeritus of integrative biology at Oregon State University, in the journal Nature Plants. Read more at Rutgers Today.