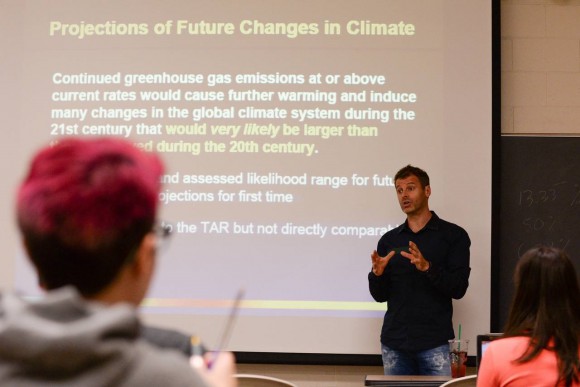 Benjamin Horton, professor in the Department of Marine and Coastal Sciences, was named the winner of the Plinius Medal by the European Geosciences Union (EGU). The award, which honors scientists for their important contributions to the Earth, planetary and space sciences, will be presented at the EGU 2016 General Assembly to be held in Vienna in April.

“It’s such a big moment for me,” said Horton. “As an American scientist, to be recognized by the European Geosciences Union is a great honor.”

“For me, this European Geosciences Union medal ultimately recognizes the students, colleagues and mentors who have always been supportive of me, both professionally and personally, throughout my career, said Horton. “But I would not have received this award if I had not had the support of my family who remind me every day of what matters in life,” he added.

The Plinius Medal awarded by the European Geosciences union.

It is named for Gaius Plinius Secundus, an Italian scientist (~23 – 79 A.D.) whose main scientific legacy consists of 37 volumes of the work, “Naturalis Historia” (Natural History).

According to its website, EGU is “dedicated to the pursuit of excellence in the geosciences, and the planetary and space sciences for the benefit of humanity.”