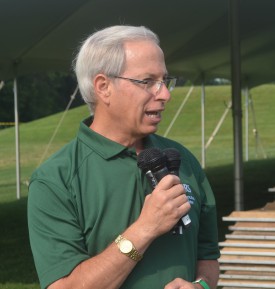 Clarke, of Iselin, N.J., is an extension specialist of turfgrass pathology in the department of plant biology and pathology at Rutgers, and is the director of the Rutgers Center for Turfgrass Science. Clarke has authored or co-authored 75 refereed journal articles and more than 200 industry publications, and he has edited three books, including the second and third editions of the Compendium of Turfgrass Diseases. He is also a frequent contributor at turfgrass conferences throughout the world.

Clarke’s research and extension programs focus on the cause and control of turfgrass diseases and integrated pest management strategies to reduce fungicide use. Clarke’s work with the biology and control of summer patch and anthracnose, and his introduction of effective cultural management and fungicides are cited as some of the most important achievements affecting the playing conditions of golf courses worldwide.

“While the efforts of scientists throughout the country advance turfgrass research and help provide golf with exceptional playing conditions, Dr. Clarke goes much further,” said Kimberly Erusha, managing director of the USGA Green Section. “He combines the qualities of an exceptional researcher with selfless dedication to outreach and outstanding commitment. His leadership at Rutgers University has motivated a team of scientists across all disciplines that has resulted in a program that is improving turfgrass conditions around the globe.”

A native of Cresskill, N.J., Clarke earned his undergraduate degree in forest management and his Ph.D. in plant pathology from Rutgers. In 1982, Clarke joined the faculty as an assistant extension specialist in the plant pathology department. He was named director of the Center for Turfgrass Research in 1994, after one year as interim director. Under Clarke’s guidance, the Rutgers program has become a center of scientific and educational excellence.

“Dr. Clarke has that uncanny ability to relate to and connect with whomever he meets,” said James A. Murphy, Rutgers University extension specialist in turfgrass management. “His communication skills are outstanding in all situations: one-on-one, small groups or large audiences. He can communicate with persons of any background, and he is just as effective listening as he is speaking. Numerous golf course superintendents, USGA agronomists and academic peers consider Dr. Clarke a friend as much as they do a colleague. They trust him and frequently seek his advice and counsel. He is selfless with his time and works tirelessly to serve any member of the golf course industry as well as students and colleagues.”

During more than 30 years as a researcher and educator, Clarke has mentored hundreds of students who are now leaders in the turfgrass industry.

“I was completely surprised when I received the call from Dr. Erusha,” said Clarke. “It’s a tremendous honor to receive the Green Section Award from an association that I respect and have worked with for more than 30 years. It’s nice to be recognized for doing what I really like to do – helping superintendents solve their turf disease problems.”

Clarke and his wife, Ellen, have two children, Chris and Katherine. He will receive the Green Section Award on Feb. 6, 2016, at the USGA’s Annual Meeting and Service Awards in San Diego.

Through the work of its Green Section, which was established in 1920, the USGA is one of the world’s foremost authorities on turfgrass management, as well as research, development and promotion of environmentally friendly practices and a more sustainable game.

The USGA conducts the U.S. Open, U.S. Women’s Open and U.S. Senior Open, as well as 10 national amateur championships, two state team championships and international matches, attracting players and fans from more than 160 countries. Together with The R&A, the USGA governs the game worldwide, jointly administering the Rules of Golf, Rules of Amateur Status, equipment standards and World Amateur Golf Rankings. The USGA’s reach is global with a working jurisdiction in the United States, its territories and Mexico, serving more than 25 million golfers and actively engaging 150 golf associations.

The USGA is one of the world’s foremost authorities on research, development and support of sustainable golf course management practices. It serves as a primary steward for the game’s history and invests in the development of the game through the delivery of its services and its ongoing “For the Good of the Game” grants program. Additionally, the USGA’s Course Rating and Handicap systems are used on six continents in more than 50 countries.