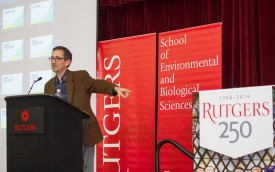 As we celebrate Rutgers 250th anniversary, will Rutgers see its 500th anniversary? This was one of the questions Executive Dean Bob Goodman challenged the audience to consider as the School of Environmental and Biological Sciences launched its 250th Anniversary celebration events under the theme, “Exploring the Anthropocene: The Age of Us,” on November 12.

Tony Broccoli, co-director of the Rutgers Climate Institute and professor in the Depatment of Environmental Sciences, introduced the speaker, Andrew Revkin, adding that Revkin “did his homework.” Broccoli went on to say that Revkin has played a very important role in reporting science topics and climate science to the public since the mid-1980s.

Andrew Revkin, an award-winning science journalist, New York Times blogger @dotearth, and senior fellow at Pace University, delighted the audience in Trayes Hall during the first Executive Dean’s 250th Anniversary Public Lecture Series. At times conversational and reflective, and at other times more serious but never confrontational, it was clear that Revkin had a message to share. 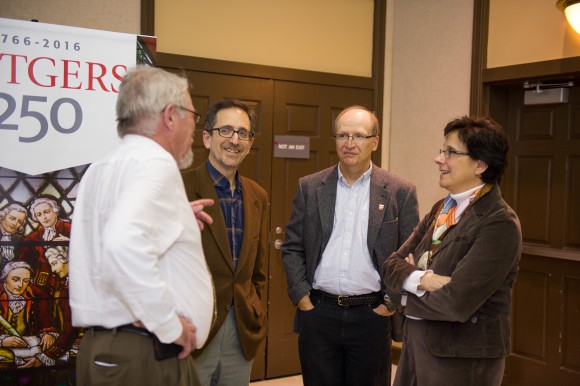 Revkin offered a plan of approach to climate change that involved building character traits in people. “We need to learn to bend, stretch, reach, teach, reveal, reflect, rejoice, and repeat—and yes, also grieve,” he said, and proceeded to define each step and offered examples of change. This move from defining climate goals to looking at how people can take action reflected his desire to have a more inclusive group of people engage.

This approach to cultivate individual traits, and not just focus on numerical goals like 350 (parts per million of CO2) or 2 degrees (of warming), was new to many in attendance. “We need to talk about the ‘how’ in pursuing these goals,” Revkin said. Expressing regret that he had not discovered the behavioral sciences earlier in his career, he said that the task ahead was not easy, but he firmly believed it was doable by taking diverse paths that individually might seem incremental but together could create surprising momentum. One audience member challenged him on this point during the Q&A session, suggesting that the planet was on life support and collective action was needed now. Revkin warned that, whether globally or nationally, there is no single “we.”

Revkin demonstrated his great skill as a science communicator. In this informative and engaging talk, Revkin shared his view of the Anthropocene—this era of us—and argued for engaging a larger diversity of people and approaches to address climate change. “There is room for more diversity of opinion and approaches in the environmental community,” he stated. 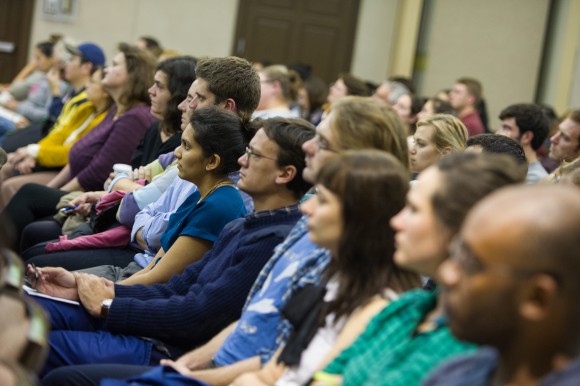 Andrew Revkin captivated the audience during his talk.

Revkin also discussed briefly the upcoming Paris Talks, pointing out that countries would be bringing incremental change and stretching a little further than they might have done otherwise. Revkin pointed out the failure of a “we” position in the climate talks and also pointed to the diversity of perspectives in approaching the climate talks, citing India and its need to address poverty, as one example.

Perhaps more sobering to hear was the big gap between the proposals for reducing climate producing gases at the Paris Talks, which only take us to 2030, and what scientists consider to be “safe” targets for carbon dioxide emissions. “The challenge,” he said, “is our collective inertia in changing a system based on fossil fuels.”

Revkin also surprised many in the audience with data regarding Germany’s continued dependence on fossil fuels. “For all of its rhetoric on being green and using alternative energy, Germany still has a long way to go to give up fossil fuels,” Revkin said, pointing to the fact that 80% of Germany’s current total energy portfolio comes from fossil fuels. 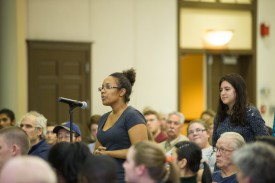 Students line up to ask questions at the Andrew Revkin talk.

He went on to point out how U.S. federal research spending did not reflect the need or the urgency of developing alternative energy solutions to fossil fuels, explaining that the last big increases in funding for the Department of Energy occurred during the energy crisis of the 1970s.

At this juncture, Revkin reiterated one of his main points: that we need “both patience and urgency” and explained that, while these seemed contradictory, we need to be acting now and also looking for long-term gains.

The audience members thought this event was a great start to the school’s yearlong programming. One audience member stated, “I didn’t know him [Revkin]. I knew the facts that he reviewed for the most part, but he had a marvelous, rational, gentle, open to diverse opinions and methods, conversational rather than confrontational, approach to dealing with the problems of climate change on local, national, and international levels. I was very impressed and intend to follow-up and look at his blog and perhaps other writings.”

At the event, Executive Dean Robert Goodman also explained why “Exploring the Anthropocene: The Age of Us” was chosen as the theme for the school for the coming year. “This theme represents all that we do here at the School,” Goodman stated and invited Revkin to help us to understand this era. Dean Goodman also thanked Revkin for bringing a diverse audience together. 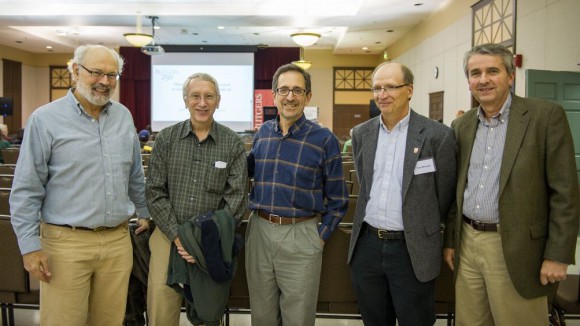 For more about this and future events, visit sebs250.rutgers.edu.