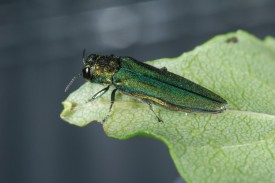 “Just as emerald ash borer has swiftly spread through other states in the nation, it has now moved to New Jersey and we must prepare for the impact of this highly destructive invasive pest, which could lead to the death of ash trees,” said New Jersey Secretary of Agriculture Douglas H. Fisher.  “We ask that towns and counties act now to put plans in place to respond to the beetle.”

In an effort to protect the state’s ash trees, the Department of Agriculture initiated the field release this fall of biocontrol parasitoids for emerald ash borer in four locations in Bridgewater, Hillsborough, Franklin and Ewing Townships. Releases of almost 9,000 larval and 1,600 egg EAB parasitoids were made in wooded ash sites containing low levels of EAB in September in an effort to help suppress building EAB populations. The beneficial insects were supplied by the U.S. Department of Agriculture’s EAB Biocontrol Laboratory in Brighton, Michigan.

Municipal officials and residents of those towns and counties are encouraged to visit the New Jersey Emerald Ash Borer website www.emeraldashborer.nj.gov where they can find resources on how to protect their ash trees or what to do with dead or dying trees. 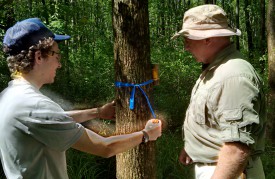 The adult emerald ash borer is a metallic green insect about one-half inch long and one-eighth inch wide making it hard to detect in the wild. The female beetles lay eggs on the bark of ash trees. The eggs hatch and the larvae bore into the bark to the fluid-conducting vessels underneath. The larvae feed and develop, cutting off the flow of nutrients and, eventually killing the tree. EAB attacks and kills North American species of true ash, and tree death occurs three to five years following initial infestation. EAB is native to Asia.

A New Jersey Emerald Ash Borer Task Force has been established, with representatives from the NJDA, NJ Department of Environmental Protection, Rutgers University, and U.S. Department of Agriculture. Professor Jason Grabosky from the Rutgers Urban Forestry Program currently chairs the NJ EAB Task Force with assistance from Pam Zipse, the program’s urban forestry outreach coordinator. The Task Force has developed a New Jersey Emerald Ash Borer website, which has many resources for municipal officials, woodland owners and residents. The site explains the signs of the beetle, how to identify ash trees, how to report a possible infestation, and what to do with dead or removed trees. For towns, there is an Emerald Ash Borer Management Plan template and a tree removal cost calculator. For homeowners, there is a risk map and treatment options.  For woodland owners, there is a list of companies that will accept ash.

New Jersey is part of a federal quarantine to prevent the spread of the beetle, which prohibits movement of ash trees outside of the quarantine zone. The Department also recommends not moving firewood. Firewood is a vehicle for movement of tree-killing forest pests including EAB. Use locally-sourced firewood when burning it at home and when travelling, burn firewood where you buy it. Make sure to burn all wood purchased.