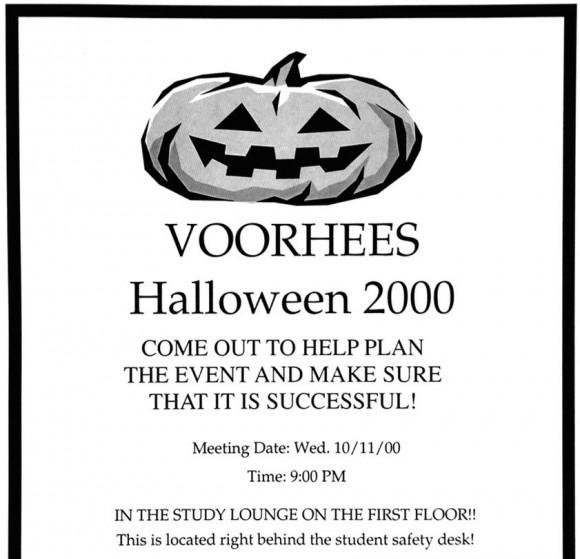 The early planning stages of the very first event that evolved into the annual Monster Mash at Rutgers.

In 2000, Justin Gayliard’s (Cook College ‘03) goal to create a safe and fun environment for disadvantaged children in the New Brunswick area to go trick-or-treating was achieved with the inception of what is now an annual Rutgers event known as Monster Mash. As we approach the 2015 event, let’s do the time-hop to remember the early years that started it all on Cook Campus.

What began as Gayliard’s community service project in October 2000 gave 15 children from Edison’s Ozanam Homeless Shelter an incredible Halloween. The event was originally called “Trick-or-Treating for Homeless Children” but was later named “Monster Mash,” after it expanded to a universitywide event based in the Cook/Douglass Recreation Center Gymnasium.

“Last year I had a desire to hold a community service project that would not only get a lot of residents involved, but would make a difference for our neighboring community,” said Gayliard in an article from Cook College’s Green Print newspaper in 2001.

As a resident assistant from 2000 to 2003, Gayliard and his staff held a meeting on a chilly October night in 2000 to plan the first Halloween event. With an extraordinary turn-out, the students transformed Voorhees and Perry halls on the Cook/Douglass Campus into haunted houses full of spooky decorations and trick-or-treating in dorm rooms.

“It turned out to be an exciting night that left two buildings and 15 children with some wonderful memories of Halloween,” said Gayliard. 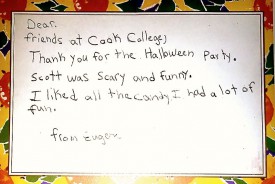 A thank-you note from an appreciative local child is what makes it all worth it.

News quickly spread of the successful event and the 2001 event tripled in outreach as children from three local shelters were able to attend. Members of the entire Cook community became involved and local businesses donated food, candy, toothpaste, toothbrushes and other items.

“It is amazing to me that during these tense times, Cook students have come together to help support and make a memorable day for disadvantaged children,” said Gayliard in 2001.

By 2003, the Halloween event, now known as Monster Mash had evolved into a huge Cook College-wide event that welcomed 60 children from local elementary schools as well as the Ozanam Homeless Shelter. The college’s Leadership Community Service Committee and other groups turned the Cook/Douglass Recreation Center into a festive Halloween party. Students participated by transforming their dorm rooms into haunted houses and handing out candy to the little visitors decked out in Halloween gear. The kids also played with horses from Rutgers Mounted Patrol, had their faces painted and played games. 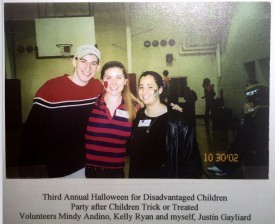 Justin Gayliard (at left) with volunteers Mindy Andino and Kelly Ryan at the Cook Campus Halloween event in 2002.

Monster Mash continues to get bigger and better every year as increasing numbers of the Rutgers community step up to lend a helping hand. Last year’s celebration drew approximately 2,400 participants with activities such as pumpkin painting, crafts, costume contests, a “Zombie Walk” and relay races.

This year, Monster Mash is being held on Friday, October 30 from 6pm- 9pm at the Cook/Douglass Recreation Center Gymnasium. Parking, with shuttle transportation to the event, will be in Lot 98 B on College Farm Road and Lot 97 on Dudley Road. Now a collaborative community outreach event, Monster Mash is sponsored by Rutgers Residence Life and Rutgers Recreation. Volunteers and Rutgers student organizations can register by visiting the website: https://sites.google.com/site/rutgersmonstermash.

“I think we all hope to leave something positive behind and I’m glad those involved in the first years of the event can look back and say they helped kick off a long lasting tradition at Rutgers. It’s great to see how much the event has grown and it’s become an even stronger connection to the community and students,” said Gayliard. 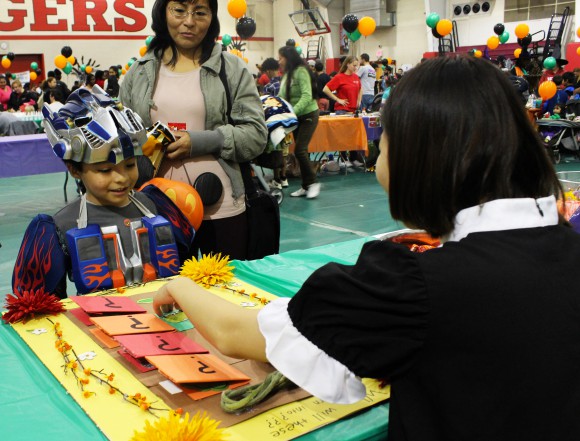 Monster Mash is now an annual Rutgers tradition held at the Cook/Douglass Recreation Center which brings the Rutgers and New Brunswick communities together for a night of Halloween fun.