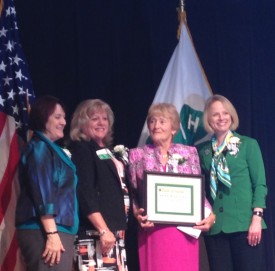 Erika Leal of Palm Coast, Florida, and formerly Wayne, New Jersey, was inducted into the National 4-H Hall of Fame on Oct. 9 for her lifetime achievements and contributions to 4-H.

Honored by the National Association of Extension 4-H Agents, Leal was one of 16 people inducted during the ceremony held at the National 4-H Youth Conference Center in Chevy Chase, Maryland.

The National 4-H Hall of Fame honorees are nominated by their home states, National 4-H Council, the National Association of Extension 4-H Agents or 4-H National Headquarters based upon their exceptional leadership at the local, state, national and international levels. 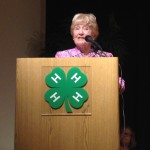 Ricki at the podium.

Erika U. Leal, known by all as Ricki, was born in Vermont and raised in New Jersey. As a child she was a 4-Her. Her undergraduate education was with the Land Grant System – in 1958 she received her bachelor’s degree from Douglass College-Rutgers University. She then married and started a family, while her professional pursuits started as a Home Economist with Stouffer’s and Hoffmann-La Rouche Inc. In 1969 she started her career with the Rutgers New Jersey 4-H Youth Development Program as a 40% Program Associate at Rutgers Cooperative Extension of Passaic County. In 1978 she was promoted to a 70% County 4-H Agent-which became full-time in 1981. This was the same time she received her master’s Degree from Montclair State College. She also graduated from the National 4-H Executive Development Institute in 1989. During a period of re-organization she served as Interim Department Chair of the 4-H Youth Development in 1995. Her final assignment from 1989 until her retirement in 1999, she served in the academic rank as Regional Agent–North (11 counties) and Associate Department Chair. Within the 4-H Department, she has experienced all levels of assignments to administer the 4-H program which was evident in how she was an advocate and mentor for 4-H professionals, not just in New Jersey but nationally in the Land Grant System.

Ricki started her career at Rutgers when there were few women providing outreach for the 4-H program. Throughout her career, she was a strong advocate for those “small voices” in the Garden State-whether it be greater gender balance with pay equity within the 4-H Department; providing younger faculty and staff career mentoring; or working with Youth At Risk. At all times, one thing could always be counted on – her positive and effective leadership, using team building and problem solving for the greater good of the 4-H Youth Development program in New Jersey. At her heart, Ricki is a strategic planner, always thinking about the long term gains of how the profession and youth can benefit and grow. This is a balance of two of the clover leaves-HEAD and HEART. 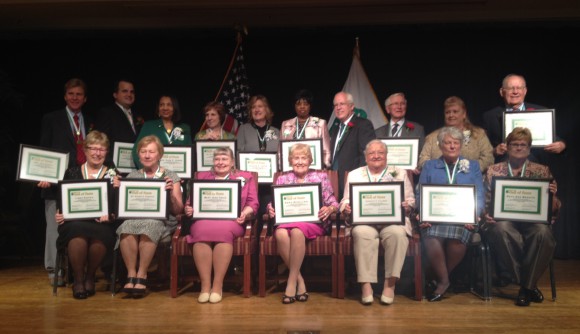 She and another colleague were responsible for creating at state-wide event for teens, called 4-H Expo in 1984. She was principal investigator for the Welfare to Work Initiative (1996-1999)-preparing grant proposals and assisting counties to identify external funds and implementing programs in urban areas and evaluating for impact. In 1993 she was recognized by the Newark (NJ) City Council for her efforts with the Soweto Academy Youth at Risk Program. During this period she served as the state contact for the Children Youth and Families Initiative until her retirement in 1999. For five years she served as the department chair designee to the New Jersey 4-H Development Fund Board of Trustees. She was a principal co-investigator from 1991 through 1996 for Competitive Youth at Risk Grant. From 1991 through 1996 she was a principal co-investigator of a USDA sponsored 4-H After School Literacy Child Care Program grant. The Hand leaf of the 4-H Clover is illustrated by her broad reach in 4-H outreach.

The Health leaf of the Clover is illustrated by her community involvement. Since 2008 she has been involved with Feed the Homeless. From 2002 through today she volunteered with the Orange/Sullivan County Community Foundation (NY); serving on the Board of Directors, 2002-2006; chair of the School District Initiative Committee 2002-2006 and a member of the Funds Distribution committee 2002-present. She has been an event volunteer with Bethel Woods for the Arts (NY) since 2007 and docent since 2012. In Florida, she has served as an events volunteer and gift shop operator with Washington Oaks State Park, since 2007. At her church, St. James Episcopal (NY) she chaired the new pastor search 2004; served on the church vestry 2004-2005; and chaired the Stewardship Committee in 2000.

Ricki was quite involved with NAE4-HA in New Jersey and nationally. She was state president in 1979. In 1983 she served as regional contact for the Policy and Resolutions Committee and was elected a Regional Director (NE) in 1984. In 1992 she was elected President Elect of the Association. In 1994 she was chosen secretary of the National Joint Council of Extension Professionals.

For more information about the National 4-H Hall of Fame event and past recipients, visit www.nae4ha.com/hof.