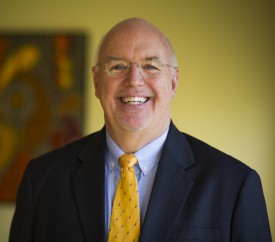 Mark Robson, (CC’77; GSNB’79, ’88; SPH’95) professor and chair of the Department of Plant Biology and Pathology, has been named a Distinguished Service Professor by the Rutgers Board of Governors (BOG). Robson, who was presented with a resolution at the board meeting on Oct. 14 by BOG chair Greg Brown, was recognized for “sustained and exceptional service to the University, to the academic profession, to the state or nation, or to the broader community by a faculty member at the full professorial rank.” Executive Dean Bob Goodman introduced Robson at the meeting.

“I am so proud to be a professor at Rutgers and it is an honor to provide service to our students and the university, but especially serve the community beyond the university,” said Robson, upon getting the award.

Robson thanked Bonnie McCay, distinguished professor emerita of the Department of Human Ecology, for nominating him for this special recognition in a letter to Dean Goodman. “In addition to his university, state, and national service, Mark’s service also includes an impressive global component. He has made significant impacts globally with his NIH and USAID projects,” wrote McCay.

In expressing his gratitude to the BOG and to Dean Goodman for the honor, Robson underscored his strong roots and support at Rutgers that have enabled him to reach into and serve the community, both here and abroad.

“Rutgers has been the path for all my adult life, first teaching me what it is to be a good servant and then allowing me to take that knowledge and share it with places like Aceh, Indonesia, or Rangsit, Thailand or Cuttington, Liberia.”

Robson has amassed a long and distinguished record of service to the university and beyond. Among his most recent recognition was being named a 2015 Loyal Son of Rutgers earlier this year. His service to the school and the university is significant, including the George H. Cook Honors committee; mentorship of ARESTY students and First-Year Interest Groups (FIGs) instructors; and service on the SEBS Admissions and Scholastic Standing Committee, which he has chaired in the past. 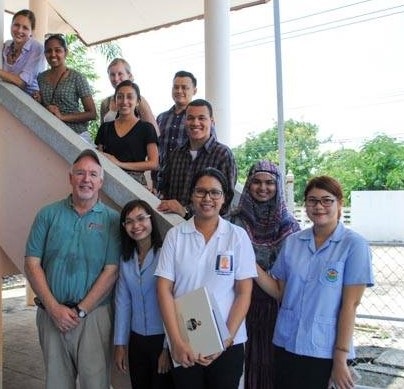 Mark Robson, at left, pictured with Rutgers students in 2014 who were part of an International Service Learning class, Public Health faculty from Chulalongkorn University and the medical staff at the Rural Health Clinic in Rangsit, Thailand.

He is active with the Rutgers Centers for Global Advancement and International Affairs and currently co-chairs its Faculty Involvement Subcommittee. He’s an advisor to students in the Agriculture and Food Systems major; one of two advisors to Alpha Zeta, the agriculture honors and service fraternity; and a long-standing mentor and advisor to the Helyar House Cooperative on the Cook Campus. For his efforts on behalf of Rutgers students, he has been recognized at the undergraduate and graduate levels with numerous awards, including the SEBS Teaching Award, the Graduate School–New Brunswick Teaching Award, the Faculty Scholar Award, the Susman Award, and the UMDNJ Foundation Teaching Excellence Award. He was named the Alpha Zeta Professor of the Year in 2013 and was the recipient of the highly competitive Association of Schools of Public Health (ASPH) Pfizer Teaching Award.

Robson has made great contributions to his profession, serving as a member of the Board of Directors for the National Board of Public Health Examiners. He’s the recipient of the prestigious Mehlman Award from the International Society of Exposure Science, which recognizes science that changes public policy. He’s also been active working with Isles, Inc. of Trenton, The New Jersey Farm Bureau, the New Jersey Department of Agriculture, and in particular, the New Jersey Department of Environmental Protection on a number of important health related issues. For two terms, from 2004 to 2010, he chaired the New Jersey Drinking Water Quality Institute.

His international service has been long and significant, resulting in his 2013 election as a Fellow of the Collegium Ramazzini, a prestigious honor recognizing his global contributions to occupational health. The mission of the Collegium Ramazzini is to advance the study of occupational and environmental health issues and to be a bridge between science and public health. Other global recognition of Robson’s work includes an Honorary Doctorate in Public Health from Chulalongkorn University in 2010, making him one of only three U.S. citizens to receive this honor; the other two were both U.S. presidents. 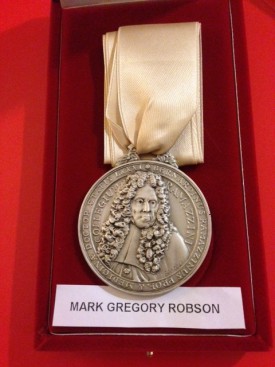 Fellow of the Collegium Ramazzini medal.

Robson established the Environmental Health Program at the Chulalongkorn University College of Public Health Sciences. He has been instrumental through his grant funding to directly support 26 M.P.H. and Ph.D. students from seven Asian countries as well as establish a dedicated faculty position and a pilot research program. In 2001, he developed one of the first environmental risk assessment courses in South East Asia. This program was funded initially by the Asian Development Bank and continues now as a sustained part of the environmental management graduate program at Chulalongkorn. To date, over 600 M.S., M.P.H. and Ph.D. students have taken the course with Robson.

The international dimension of Robson’s work was also reflected strongly in his being presented the 2013 Malone International Leadership Award by the Association of Public and Land-Grant Universities (APLU), in “national recognition for a career of outstanding contributions to further international education at state and land-grant institutions.”