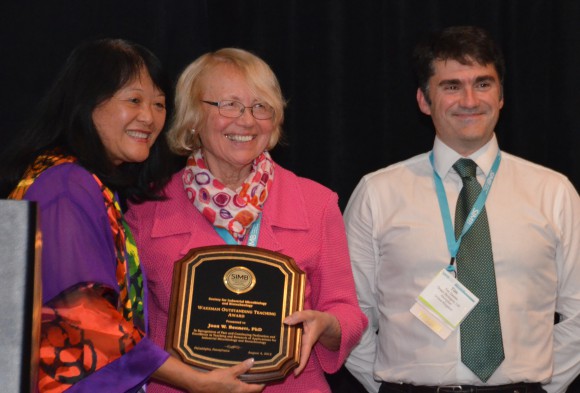 Joan W. Bennett, professor in the Department of Plant Biology and Pathology, received the 2015 SIMB Waksman Outstanding Teaching Award, funded by the Waksman Foundation for Microbiology, at the annual meeting of the Society for Industrial Microbiology and Biotechnology (SIMB) in Philadelphia, PA, Aug. 2-6. This SIMB award is named for Nobel Laureate Selman Waksman, who was an outstanding teacher of microbiology at Rutgers and the co-discoverer of streptomycin, the first antibiotic effective against tuberculosis.

Bennett was the recent Associate Vice President of the Office for the Promotion of Women in Science, Engineering and Mathematics at Rutgers, charged with promoting the welfare of women in science, engineering, mathematics and the health professions across the three campuses of Rutgers University at Camden, New Brunswick and Newark.

She was nominated for the SIMB Waksman Outstanding Teaching Award by her students and post-docs, who were guided in the process by former professor Douglas Eveleigh, the first recipient of the SIMB Waksman Outstanding Teaching Award, which was instituted in 1989. Eveleigh retired in 2014 as the Fenton Chair in Applied Microbiology in the Department of Biochemistry and Microbiology. 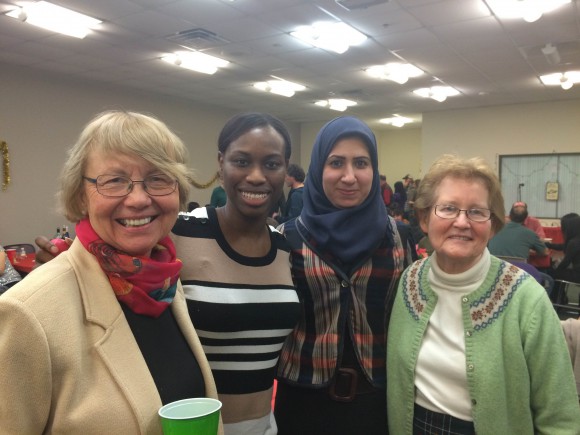 At left, Joan Bennett with students and colleague from her lab.

“I have a lot of women students in my lab. It has always been one of my passions, supporting women in science,” said Bennett.

She recently shared some of her thoughts on teaching with the SEBS/NJAES Newsroom: “Forgive the cliché, but in teaching “one size does not fit all.” Students vary enormously in preparation, career plans, personality, willingness to study, and often in the simple ability to read and understand the English language. Anyone who is a college professor knows that teaching is a lot more than standing up in front of a class and giving lectures. Teaching is about connecting with individual students and hoping that you can inspire them, in one way or another, to become lifelong learners. When you are lucky, some students grow into friends. When you are lucky, some former students surpass you intellectually and professionally. When you are really, really lucky, some former students thank you for what you tried to do when you were their teacher.”

Bennett’s research has focused on aflatoxin genetics and biosynthesis with the goal of preventing their entry in agricultural produce, especially in Africa, Asia and other underdeveloped regions of the world where it’s a major problem. Aflatoxins are highly toxic fungal metabolites that contaminate foods and feeds globally.

Her more recent research, however, focuses on the gas phase (volatile) compounds produced by indoor molds and their potential impact on human health. This research was inspired by her experience following Hurricane Katrina, which is the subject of her magazine article, “The fungi that ate my house,”  published in Science.

The Waksman Foundation for Microbiology is a private, charitable organization established in 1951. Its purpose, in the broadest sense, is to promote the science of microbiology wherever and whenever possible. In the last 20 years, the Foundation has focused primarily on the communication and public understanding of science and on improving K-12 science education by training teachers in the hands-on use of microbiology in the classroom.
The Foundation supports research and education in the general field of microbiology, including medical disciplines, agricultural and soil microbiology, marine microbiology, and the diverse environmental interactions of microbes.”

The recipient of the Society for Industrial Microbiology and Biotechnology Waksman Outstanding Teaching Award “shall have been an active full time professor at a recognized institution of higher education for a minimum of 10 years or has attained emeritus status.”