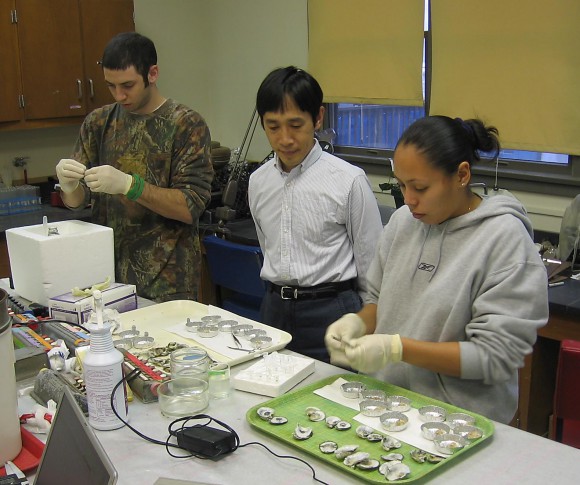 Ximing Guo supervises students learning to extract DNA from oysters in his lab at the Haskin Shellfish Research Laboratory in Bivalve, NJ.

The scholarly excellence and vast collaborative network fostered by the oyster researchers at Haskin Shellfish Research Laboratory (HSRL) in Bivalve, NJ, has propelled Rutgers to number three among the top 10 most productive oyster research institutions in the world. Its high ranking was further confirmed in a recent paper published in Aquaculture International, whose authors analyzed primary literature published on oysters over the past 23 years and found that Rutgers researchers get top honors among the global community of 23,414 authors studying oysters.

The literature analysis ranked faculty at the Haskin lab at the top in terms of oyster research globally, with senior faculty Ximing Guo, shellfish geneticist, and Dave Bushek, director of the Haskin laboratory, among the top 20 most productive authors. Guo, who shared the 2013 “Inventor of the Year” Award from the New Jersey Inventors Hall of Fame and holds several U.S. and international patents in shellfish genetics, missed the top ranking by only two publications. 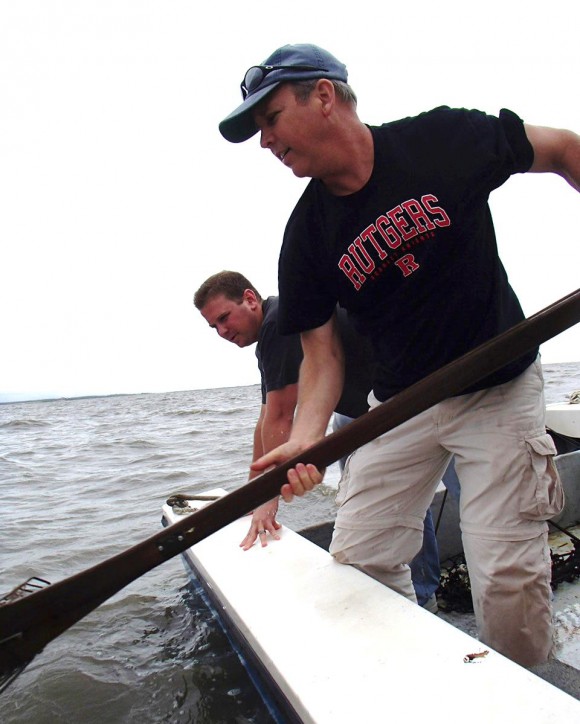 Former HSRL faculty Susan Ford (Emeritus), Standish Allen (1988-1997, currently at William & Mary’s Virginia Institute of Marine Science) and Eric Powell (1995-2012, currently at the University of Southern Mississippi), were also among the global top 20 oyster researchers identified in the literature review. Guo and Allen were honored for their work in shellfish genetics, which the New Jersey Inventors Hall of Fame said is “revolutionizing” the shellfish industry.

A field station of the New Jersey Agricultural Experiment Station, HSRL is internationally recognized for its extensive fisheries and aquaculture research, especially on species of commercial importance to New Jersey. It maintains a strong leadership role in researching and managing oyster resources in the Delaware Bay, once the dominant oyster producer on the East Coast, as well as the large clam and scallop fisheries off the Atlantic coast of New Jersey.

In addition to the laboratory, HSRL comprises the Rutgers Cape Shore Facility and the Aquaculture Innovation Center in southern New Jersey. Learn more about the history of the Haskin Shellfish Research Laboratory.