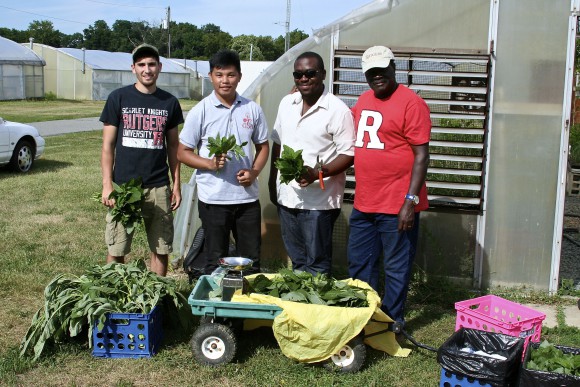 It was only 9 a.m. but the August sun was already blazing over Hort Farm 3 on the George H. Cook Campus. The Entrepreneurship Agriculture Program (EAP) interns didn’t seem fazed, though.

Arlan Rodeo, a Professional Science Master’s (PSM) program student, simply rolled up his sleeves and continued to dunk bunches of amaranth into tubs of water, cleaning the crop to be sold at the New Brunswick Community Farmers Market (NBCFM) later that morning.

“We sold out of amaranth very early last week. We’re testing a new volume today to see how much can be sold,” said Rodeo.

For the first time in the history of the program, the EAP interns have a table to sell home-grown, fresh vegetables on Wednesdays and Fridays at the NBCFM and the Rutgers Garden Farmers Market, respectively, from now until October. The produce includes amaranth, exotic peppers, okra and eggplant grown in three different ways—regular, organic and hydroponic. The EAP sells its produce under the slogan, “Eating Fresh is Eating SMART!,”which is prominently displayed on market day. 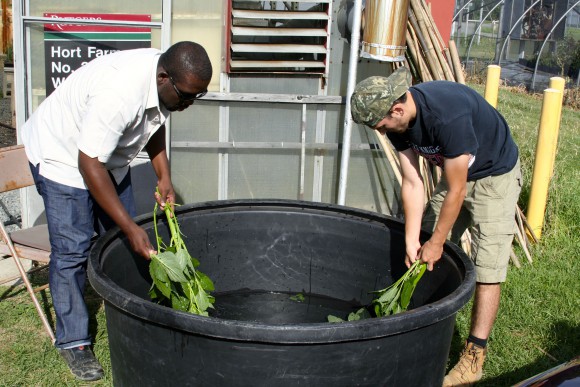 The EAP was initiated at Rutgers School of Environmental and Biological Sciences (SEBS) in Spring 2013 and comprises the teaching of a Jr./Sr. Colloquium on Entrepreneurial Agriculture, a competitive student internship on Entrepreneurship Agriculture. In addition, the program includes the formation of a student club whose mission is to promote entrepreneurship in agriculture and food at SEBS. The person most closely associated with promoting entrepreneurship in food and agriculture at the school is Albert Ayeni, an ethnic crop specialist and instructor in the Department of Plant Biology and Pathology. Ayeni is the coordinator of the program and co-director of SEBS’ International Science and Education Program.

“What if we had Engineering students who could develop a machine to chop vegetables? Food Science students to work on produce packaging? Business students to develop effective marketing plans?” Ayeni asked, while describing the student club component of the EAP.

Ayeni’s mission to expose students to real agriculture: the basics of harvesting, handling, and delivering products from farm to table, has attracted a diverse group of participants who have discovered their own callings in the field while still working as a team.

Edwin Xue (SEBS ’16) is developing a healthy sauce that packs way more flavor and nutrition than your average marinara.

“It’s so much more than tomato sauce, but he’s not ready to release his trade secrets yet,” said Ayeni.

EAP students are also able to use the services of the Rutgers EcoComplex in Bordentown, NJ, and Kevin Marceski (SEBS ’16) is taking full advantage. Using the sustainable equipment provided at the EcoComplex Greenhouse, Marceski is able to grow amaranth hydroponically. His knowledge agricultural economics has also come in handy, and he’s created his very own business plan that includes growing, packaging and marketing the greens to local consumers.

For those who are not up to speed on the trendiest produce of the season, amaranth is a plant similar to spinach. It’s widely used in Indian, African and Latin American cuisine dating as far back as the ancient Aztecs. Amaranth is rich in carbohydrates, protein and vitamins K, A, C, B6 and has been used in herbal remedies and medications in both African and Chinese cultures.

“The demand for amaranth and okra is jumping like crazy. Our consumers seem to gravitate towards indigenous crops,” said Rodeo.

The EAP program is already looking ahead to trends in agriculture and responding to what consumers want, seeing potential growth areas in niche vegetables. The excitement in Ayeni’s voice was palpable when he spoke about TigerNuts, a superfood currently being grown at Hort Farm 3. TigerNuts are actually tubers, a small root vegetable originating from Northern Africa and the Mediterranean that is high in fiber, iron, potassium and is gluten-free. Ayeni and the EAP interns hope to have the crop available for sale later this growing season. 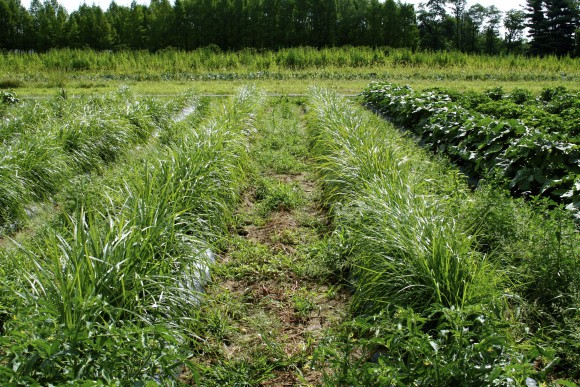