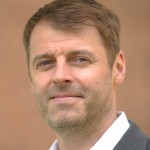 In a study published in the journal Science, Professor of Marine and Coastal Sciences Ben Horton and an international team of scientists concluded that 125,000 years ago, when global average temperature was 1°C higher than pre-industrial levels, sea levels rose 20 to 30 feet higher than present. Sea level peaked somewhere between 20 and 40 feet above present levels during an earlier warm period about 400,000 years ago, when global average temperatures are less certain, but estimated to be about 1 to 2°C warmer than the pre-industrial average. Read more at Rutgers Today.