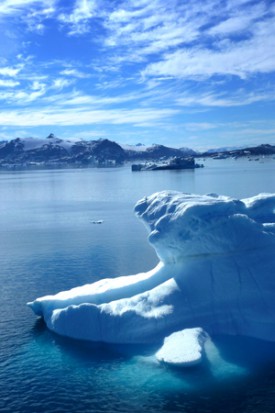 Icebergs near Timiamuit, in southeastern Greenland. Photo by Antony Long.

In a new research study, Professor of Marine and Coastal Sciences Ben Horton and an international team of scientists assessed evidence of higher sea levels in the past 3 million years to understand how polar ice sheets respond to warming. Using observations from the geologic record, supported by computer modeling, they found that during past periods with average temperatures 1 to 3 °C (1.8 to 5.4 °F) warmer than pre-industrial levels, sea level peaked at least 20 feet higher than today. The findings, published in the journal Science showed that the seas rose in response to melting ice sheets in Greenland and Antarctica. Read more at Rutgers Today.