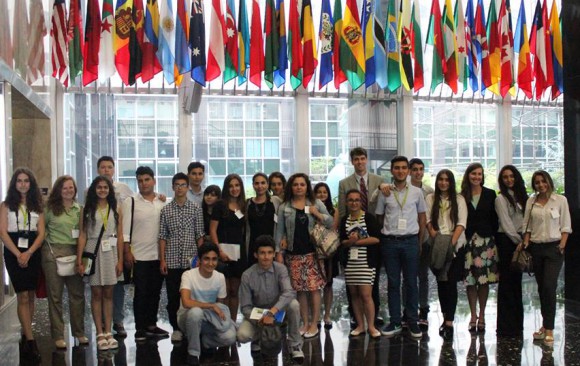 County agent, Alayne Torretta, 2nd from left and Azeris meet with Gregory Marcus, in suit and tie in back, from the US Department of State.

Over the course of three weeks in June this year, 18 youth and two adult educators from Azerbaijan participated in a Youth Leadership Program funded by the U.S. Department of State and facilitated by the 4-H programs of University of Delaware and Rutgers University. During this exchange program, which focused on the general themes of civic education, leadership development, entrepreneurship, and community service, the Azerbaijani youth toured parts of the U.S., learning about democracy and hearing tips and tricks from successful entrepreneurs from New Jersey.

Each of the entrepreneurs the youth heard from had their own methodology for success. One family owned business, Wild West City – a theme park in Netcong, NJ, has been tremendously successful in keeping true to the mission set forth in 1963, while another amusement park ,the Land of Make Believe in Hope, NJ, found success in expanding and growing. “Each of them gave the youth sage advice: Stay focused and realize that no job is beneath you,” said Alayne Torretta, County 4-H Agent for Rutgers Cooperative Extension and program coordinator for the Rutgers grant. In addition, they met entrepreneur Carol Bailey who holds a patent in England for reusable shopping bags that fold into one another called Shopparoos. She spoke with the teens about patenting great ideas and how to market them by keying in on their unique selling point. “We were able to take advantage of the New Ventures and Entrepreneurship http://orc.rutgers.edu/Entrepreneurship/home program at Rutgers as well,” said Torretta, “Lori Dars was amazing and got the kids thinking of how to write a business plan. They also met a graduate student entrepreneur who spoke about the exciting work he is doing. Several of the teens expressed interest in attending Rutgers once they are finished with schooling in Azerbaijan. 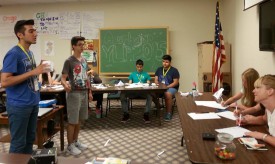 The program tied together some of the cultural visits with their educational workshops. While visiting Philadelphia, the group had lunch at the Reading Terminal Market where they spotted Valley Shepherd Creamery’s farm stand. They had visited the Creamery in Long Valley, NJ the week before and learned about their success in making cheese and direct marketing.

Two weeks were spent with host 4-H families in New Jersey and Pennsylvania and one week was devoted to a visit to Washington, D.C. where they had a meeting with grantor, the Youth Programs Division of the Bureau of Educational and Cultural Affairs in the US Department of State. They also met with U.S. Representative Leonard Lance’s office of New Jersey’s 7th congressional district, learning about democracy and touring the various memorials in the nation’s capital. 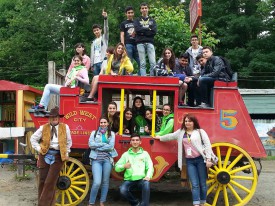 Participants pose with Wild West City’s “Calamity Jane” during a private tour of the park.

The three week visit to the U.S. was not all work, however, said Torretta. The Azerbaijani youth spent two days in the Big Apple exploring Central Park, learning the history around Wall Street and the New York Stock Exchange, attending the Broadway musical, “Phantom of the Opera,” and visiting the Statue of Liberty.

Upon return, alumni will become part of the American Embassy in Azerbaijan’s alumni network and be eligible to receive small grants for community development projects.