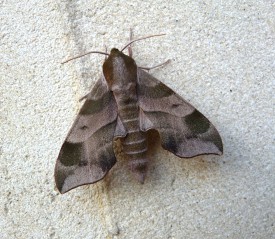 A sphinx moth. The Sphingidae family of moths are found throughout the world. Photo by David Moskowitz.

A Mercury vapor light and white sheet will be set up and a long sugar bait trail will be created to attract moths after dark. The Jamesburg Park Conservation Area is part of the Middlesex County Parks system. It lies within the Spotswood Outlier—the northernmost area of New Jersey Pine Barrens habitat separated from the main area of the Pine Barrens to the south by about 15 miles. This protected area is situated in East Brunswick, Helmetta, Spotswood and Monroe Township. It is rich in vegetation diversity and should be an interesting place to look for moths.

This year, National Moth Week will spotlight the Sphingidae family of moths found throughout the world commonly called hawk moths, sphinx moths and hornworms. The Sphingidae family includes many widely found species, such as day-flying moths like the “hummingbird moth,” (genus Hemaris) a “hawkmoth” also known as clearwings, which mimics bumblebees and hummingbirds. Also among the estimated 1,450 Sphingidae species are the Pandorus sphinx, Elephant hawk moth, White-lined sphinx, Gaudy sphinx and One-eyed sphinx. It is believed they get their nickname of “hawk moth” from their rapid flight. They have been studied for their flying ability, being among some of the fastest flying insects.

“Hawk moths are important pollinators of native plants, especially in arid environments like the American Southwest,” said NMW team member Elena Tartaglia, who earned her Ph.D. in Ecology from Rutgers and is currently an assistant professor at Bergen Community College. “They visit plants to get nectar and in the process, their large furry bodies can carry a lot of pollen. Like most moths, they are an important component of food webs as food for birds, small mammals, lizards and predatory insects.” Sphinx moths get their nicknames from the sphinx-like pose they often have while resting on plants as caterpillars. Hornworms are so named for the “horns” on the posterior end of the caterpillar.

National Moth Week is a project of the Friends of the East Brunswick Environmental Commission, a nonprofit organization dedicated to environmental education and conservation. The event grew out of local summer “Moth Nights” organized by David Moskowitz and Liti Haramaty of the Friends since 2005. The events typically attract 30 to 50 persons, some with scientific backgrounds, but mostly local residents and their children who want to experience a unique nighttime nature activity.

In March, a bill to name the Io moth the official state moth was introduced by N.J. Assemblywoman Nancy Pinkin in the New Jersey State Legislature. If passed and signed by the governor, New Jersey would become the first state to designate a state moth.

“National Moth Week raises awareness about the amazing world of nighttime nature that many people have never observed,” said Moskowitz, an environmental consultant and Ph.D. candidate in entomology at Rutgers University. “Thousands of photos taken by citizen scientists at mothing events have been uploaded to data depositories by participants.”

“Moths can be observed anywhere, anytime,” said NMW co-founder Liti Haramaty, a researcher at Rutgers Department of Marine and Coastal Sciences. “It’s easy and fun – just turn on a light and wait for the moths to find it. Anyone with a digital camera can contribute to our knowledge about moths’ diversity and distribution, and help us to better understand the impact of human activities on the ecology of our planet.”

“National Moth Week is a fun and educational way to introduce kids to science through the world of moths,” said Jacob Gorneau, 17, a junior at Greenville (N.Y.) High School and the youngest member of the NMW team. “With about 12,000 species in North America, and many more to be described, the beginner can expect something new at the light almost every time.”

Anyone can participate in National Moth Week. “Moth-ers” of all ages and abilities are encouraged to learn about, observe and document moths in their backyards, parks, and neighborhoods.

There is no fee to register a U.S. or international event. Registration is open to individuals, groups and organizations. Participating organizations have included National Parks and Monuments, state and local parks, museums, libraries, camps and nature clubs. Anyone can register a public or private event or find one to attend in their area by checking nationalmothweek.org for public events.

National Moth Week (NMW) shines a much-needed spotlight on moths and their ecological importance as well as their incredible biodiversity. This nine-day global event encourages children and adults to become “citizen scientists” and contribute photos and data to online databases. Last year, more than 400 events were held in all 50 states and 42 countries.

A moth-ing event can simply involve turning on a porch light at night and watching what happens, or going outside in daylight to find caterpillars and diurnal moths. Participants can use ordinary light bulbs, UV lights, or mercury vapor lights to attract moths, or brush sweet moth bait on tree barks.

Through partnerships with major online biological data depositories such as BAMONA, Project Noah, Encyclopedia of Life, Discover Life, and iNaturalist, National Moth Week encourages participants to record moth distribution and to provide information on other aspects of their life cycles and habitats.

Participants are encouraged to document their sightings and contribute their photos to organizations that partner with National Moth Week, such as Project Noah, iNaturalist and others. More information can be found at nationalmothweek.org.