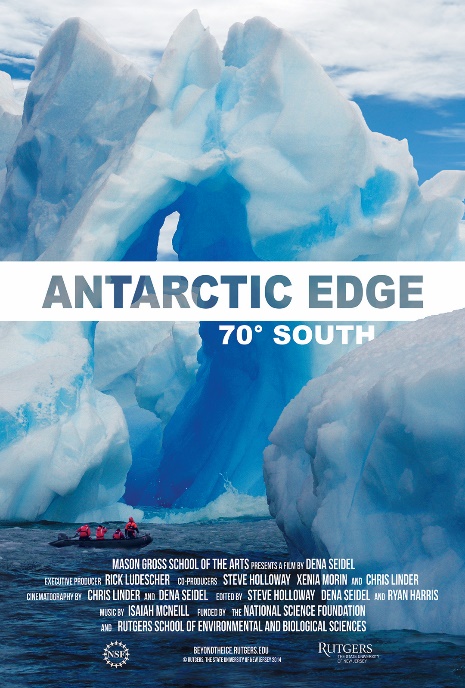 Have you ever wondered what it would be like to be a researcher in the Antarctic? Would it be easy or hard for the scientists and the crew? Would you see penguins and icebergs?

Now is your chance to answer these questions and more from the comfort of your home as Antarctic Edge: 70° South, the award winning Rutgers documentary film that captures a thrilling journey to one of the world’s most perilous environment, debuts June 30 on iTunes. It’s also a story of climate change from one of the most remote parts of the world, according to Oscar Schofield, the lead scientist in the film and Rutgers professor of marine and coastal sciences. “It’s a race against time,” he says in the film.

The documentary, which follows a team of world-class scientists as they explore the fastest warming place on earth: the West Antarctic Peninsula, debuts later summer on Netflix starting August 1. DVDs will be available from First Run Features. Pre-orders are currently being taken and some of the proceeds will return to Rutgers.

Filmed in one of the most perilous environments on the planet, Antarctic Edge brings to life the stunning landscapes and seascapes of the Earth’s southern polar region. It depicts the harsh conditions and huge challenges that scientists endure for months at a time. While navigating through 60-foot waves and dangerous icebergs, the film follows the team as they make land on rugged, inhospitable Charcot Island to study the rapidly declining Adelie penguin. For the scientists, these birds are the greatest indicator of climate change and a harbinger of what is to come.

“Even if we could stop climate change tomorrow, the oceans have so much heat stored and will continue melting ice,” says Schofield. “The rising ocean temperatures in Antarctica means warming in the U.S. at nearly twice the global rate. Hundred-year storms like Sandy are expected to become 10-year storms. If we don’t adapt, our fate can be similar to the (penguins dying out).”