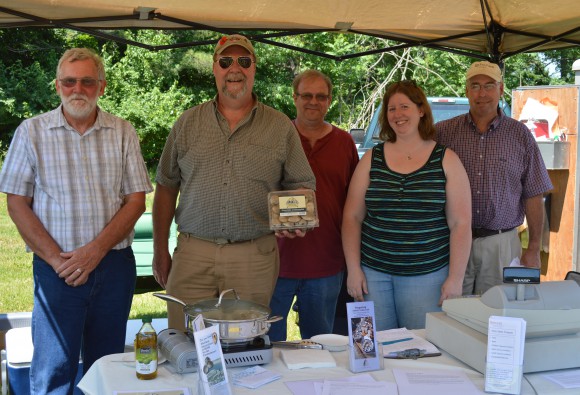 A growing number of New Jersey farms are offering community supported agriculture programs (CSAs) which allow customers to become a member or shareholder, providing them with a season’s worth of produce that they pay for in advance, and then pick up on a weekly or biweekly basis. A similar strategy to boost an allied industry, Jersey Seafood, has been in development in New Jersey since 2012. Through the efforts of the marine program of Rutgers Cooperative Extension (RCE) of Ocean County, a community supported fishery (CSF) has operated for the past three years as part of Sea Salt CSA at B&B Farms in Galloway Township in Atlantic County. The pilot CSF in Atlantic County has spawned several new CSFs this year, with one in Ocean County at Beach View CSA, one at Heirloom Kitchens in Old Bridge (a culinary boutique), and one at the Rutgers Gardens Farm Market in New Brunswick. Plans are in the works for others. What distinguishes the New Jersey-model CSF from others around the U.S., is rather than have seafood pick-up at a particular boat or dock that would limit the number of species offered, Marine Extension Agent Gef Flimlin of RCE of Ocean County arranged to work with a variety of fishing docks and shellfish farmers to diversify the offerings.

Previous offerings from the pilot CSF included soft crabs, littleneck clams, oysters, thresher shark (abundant and not endangered), golden tile, albacore tuna and lobsters. George Mathis of Heritage Shellfish Cooperative in Egg Harbor, who is working with Flimlin to keep the biweekly pick-ups supplied with the freshest available catches, explains, “You have to deal with the vagaries of fish.”

Since Jersey clams are available all year round, they will fill in during the ebb and flow of seasonal catches. For instance, Mathis says that soft crabs are typically available in June but this year the local supplier alerted him that the catch was ready at the end of May. Mathis will go further south and seek Delaware Bay soft crabs to provide the CSF with its opening season share in June. The CSF also coordinates with the Barnegat Light Viking Village longliners, who work on the full moons to land large fish like tuna and shark, to source fresh product for the biweekly shares.

With access limited to dining down the shore or frequenting the few mainland stores and restaurants that feature local food, this innovative effort fills a void for New Jersey residents seeking fresh Jersey Seafood. Also, while fishing docks and shellfish purveyors have limited venues to sell retail, this meets the needs for both parties, as well as bringing in customers to the vendor that is hosting the CSF. Mathis points out that the CSF brings to consumers the freshest seafood, most of which is 12–20 hours from dock to delivery. A win-win situation all round.

Eventide Littleneck clams from Heritage Shellfish Cooperative will be part of the CSF seafood shares.

On a sunny Friday in late May, Flimlin and Mathis brought some fresh Heritage Shellfish clams to the Rutgers Gardens Farm Market to stir up some interest in the CSF. Steaming fresh clams in garlic, olive oil and white wine, Flimlin gave passersby a taste of Eventide Littlenecks, the primary branded product of Heritage Shellfish Cooperative. The CSF at Rutgers Gardens Farmers Market is piggybacking on an already established Rutgers venue for selling locally grown meat, the Rutgers NJAES Animal Care Farm Sales Program.

A unique operation in itself, the student farm sales program sells meat products of animals that are raised on the campus research farms. These animals are not fed antibiotics or hormones, but they are fed standard feed. The revenues from the sales of the meat products help sustain the program which provides the animals for student study of animal care. Clint Burgher, director of the Animal Care Program, will be expanding their cooling equipment to accommodate the seafood. A trailer that holds the freezer for the meat products will be replaced with a larger one that will hold a refrigerator for the seafood and as well as the freezer for the meat. CSF pick-ups will begin at the Rutgers Gardens on June 19. Heritage Coop is donating 10% of their sales to the student farm for their assistance with CSF distribution at the market.

Heirloom Kitchen on Rt. 516 in Old Bridge is a kitchenware boutique/recreational culinary school. Biweekly pick-ups will be on Fridays, starting June 19. Owned by mother and daughter team Judy Rosenblum and Neilly Robinson, the pair is excited about hosting the CSF and have added a tribute cooking class to their summer schedule. Called the “Jersey Shore CSF Mystery Basket”, the class is open to the public and will feature that week’s seafood share, which will be determined earlier in the week through communications with Mathis.

Beach View Farms is a relatively new CSA venture in Manahawkin, NJ, that provides Certified Naturally Grown vegetables and small fruits. While the CSA operation is independent of the CSF, there are some Beach View CSA members who also are signed up for the CSF and they can pick-up both their CSA and CSF shares at the same time at the farm. The CSF shares for Beach View begin June 20. 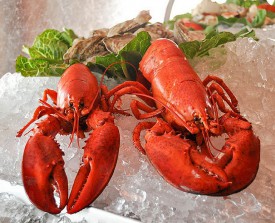 While Jersey Seafood has a reputation for being high quality and responsibly raised or harvested, New Jersey residents that purchase retail seafood are most often getting products that are not only not from New Jersey, but also not from the U.S.

According to Flimlin, “In a time when we import 91% of the seafood consumed in the U.S., helping the local fishermen and shellfish farmers is a great way to support the food producers of New Jersey and their families.”

Recognizing that expanding the CSF model in New Jersey is a coup for the industry, Flimlin adds, “My job is to help shellfish farmers be economically viable and environmentally responsible and this is pretty much the culmination of both.”

To sign-up for the 2015 season Community Supported Fishery, visit http://heritageshellfish.com/members/types.