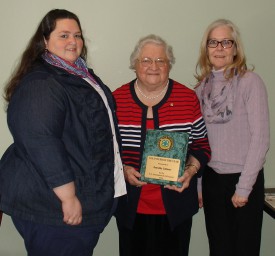 Dorothy Calimer (center), is pictured receiving the Rutgers 4-H Volunteer of the Year Award earlier in 2015. At left is Navonne Owen and at right is Debi Cole, 4-H staff of Atlantic County and members of the New Jersey Association of 4-H Agents.

New Jersey resident and Atlantic County 4-H Volunteer Dorothy Calimer has been named one of 16 individuals to be inducted into the National 4-H Hall of Fame during a special ceremony to be held on October 9 at the National 4-H Youth Conference Center in Chevy Chase, Maryland.

The 82-year old Calimer of Cologne, NJ, will be among the Laureates of the National 4-H Hall of Fame Class of 2015 to be honored for excellence in citizenship, leadership, character and career accomplishments. Earlier this year, Calimer was named the 4-H Volunteer of the Year by the New Jersey Association of 4-H Agents for her significant contributions to the New Jersey 4-H program. Former Rutgers Regional 4-H Agent Erika (Ricki) Leal, who currently represents the National Association of Extension 4-H Agents, was also named one of the 4-H Hall of Fame Laureates to be inducted later this year.

The 16 laureates in the Class of 2015 are drawn from 4-H programs across the U.S., U.S. territory and the District of Columbia as well as 4-H’s three national partners: National Association of Extension 4-H Agents, National 4-H Council and National 4-H Headquarters at National Institute of Food and Agriculture, USDA.

“These individuals have touched the lives of many people, from 4-H staff and colleagues to thousands of 4-H volunteers and members throughout the nation,” said Jeannette Rea-Keywood, Chair of the National 4-H Hall of Fame.

The National 4-H Hall of Fame was created in 2002 as a 4-H Centennial project to recognize and celebrate those people who have made a significant impact on 4-H and its millions of members for more than 100 years.

4-H serves more than 6 million young people across America annually with research based programs in leadership, citizenship, communication and life skills. For over 100 years, 4-H has connected the science, engineering and technology innovations of land-grant universities to local youth and families. 4-H National Headquarters at NIFA, USDA provides programmatic leadership for the U.S. 4-H Youth Development program. 4-H programs are offered in every county in the United States. For more information about 4-H, visit the national 4-H website.