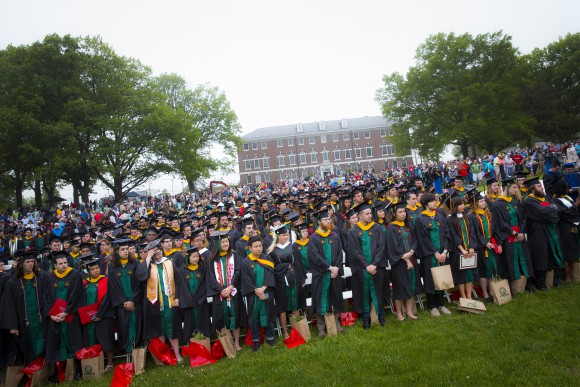 On a chilly, blustery May 18, the mist that blew across Passion Puddle did not dampen the spirits of the graduating seniors attending the Rutgers School of Environmental and Biological Sciences 2015 Convocation. Dean of Academic Programs Rick Ludescher led the ceremony while Executive Dean Bob Goodman addressed the Class of 2015, which totaled 725 graduates.

The Dr. Barbara Munson Goff Teacher of the Year Award was presented to Tim Casey of the Department of Ecology, Evolution and Natural Resources. Biological Sciences major Ariel Booth presented the class remarks.

In an annual tradition that began in 1982, members of the Cook alumni association presented the graduates with red oak seedlings to take a living part of the George H. Cook campus with them as they embark on their next journey. View images of 2015 Convocation on the SEBS Facebook album.