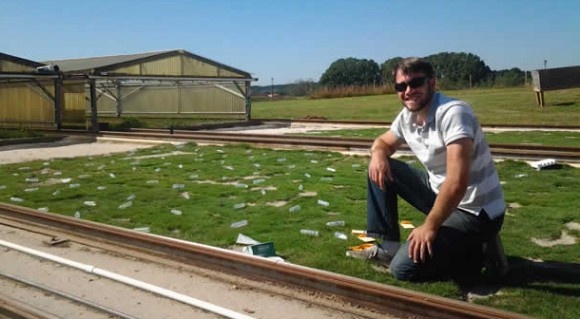 David Jespersen taking field samples at the University of Georgia–Griffin agricultural research station in Summer 2014 as part of a collaborative project to better understand the underlying genetics that control heat tolerance in grasses. Photo: Courtesy of David Jespersen.

David Jespersen, doctoral student in plant biology, received the Graduate School–New Brunswick Dean’s Award for Excellence in Research for his exceptional research accomplishments at the Spring Awards ceremony on April 23. He was one of six awardees chosen among all graduate students campuswide.

A mere six years earlier, David graduated with a bachelor’s degree in psychology from the School of Arts and Sciences—far removed from the world of plant science. So, how did he get from studying psychology to being on the verge of completing his dissertation research on identifying heat-tolerance traits and genes in bentgrass and helping to develop heat-tolerant bentgrass and other species, all the while earning several significant accolades for his achievements along the way?

“I’d taken a few electives in plant science as an undergraduate and found that I had a growing interest in plants, and in my final undergraduate semester I went to talk to the graduate program director about pursuing a master’s degree in plant science,” explains Jespersen. “As it turned out, instead of pursuing a master’s degree, I turned my attention to a Ph.D. instead, with the encouragement of Prof. Huang.”

David’s plans to do a master’s degree changed because he landed a summer internship with Bingru Huang, professor in the Department of Plant Biology and Pathology at the School of Environmental and Biological Sciences. Huang is the very graduate program director in plant biology with whom David had met to discuss his post-graduation plans as a senior. During the course of the internship, Huang saw his work ethic and was impressed with how quickly he took to research in plant physiology.

Huang is unabashed in her praise of David’s progress in the Ph.D. program. “He’s excelled not only in dissertation research but also in class, and is in the top 2% in the graduate program of plant biology at Rutgers, with a perfect 4.0 GPA,” says Huang. 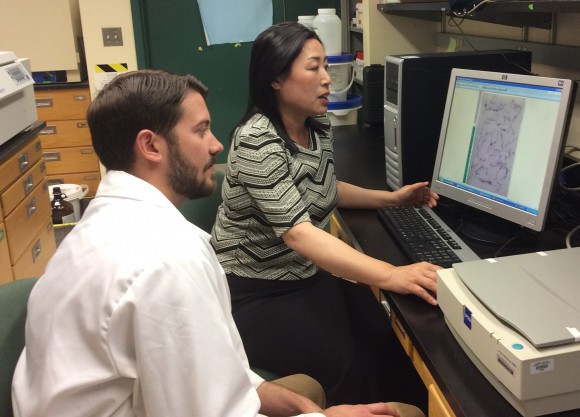 “His success is all the more remarkable in that he had no undergraduate preparation for the field.”

David’s dissertation research, which focuses on enhancing the performance of bentgrass species during and after summer stress and developing other cool-season turf species, has already been recognized by the turfgrass industry. In 2014, he was one of only three recipients nationwide to be selected from among graduate students in turfgrass science to receive the prestigious Watson Fellowship from the Golf Course Superintendents Association of America. The fellowship, named after the late James R. Watson, Ph.D., a former vice president for Toro who pioneered turfgrass research, carries a $5,000 award and recognizes doctoral students identified as promising future teachers and researchers in the field of golf course management.

Not to be outdone, the New Jersey Turfgrass Association presented him with its Challenge Award in 2014. And, even closer to home, the Department of Plant Biology and Pathology selected David to receive its Eileen Brennan Research Award in 2014, in recognition of his outstanding research achievements.

His teaching skills did not go unnoticed. The School of Arts and Sciences honored David for his distinguished contributions to undergraduate education as a Teaching Assistant in General Biology.

David, who considers himself a fairly reserved person, was pleasantly surprised to find that he loved the interaction of teaching as much as he did. “I enjoyed teaching, especially undergrads, because I find them very engaged.”

He attributes that to sharing something that he’s passionate about – the biology and physiology of living things, animals or plants. While he’s been a Teaching Assistant (TA) at Rutgers since 2011, he was named the Head TA by the Division of Life Sciences in Fall 2014. His responsibilities include managing a laboratory course with over 600 undergraduates, writing exams and laboratory materials, as well as training other TAs. 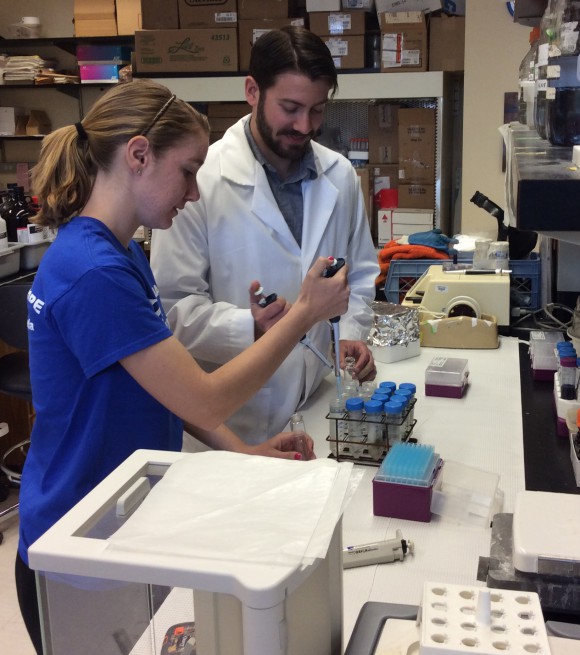 In addition to research and teaching, David has been active in the graduate student club in plant biology since 2011, serving in various leadership positions, including vice president, president and co-president. He’s helped organize multiple recreational, fundraising and community service events.

David has already published fairly extensively. He’s authored and co-authored one book chapter and five refereed articles in top-tier journals in turfgrass science and physiology. According to Huang, his dissertation research will result in at least eight articles in referred journals and two articles for trade journals in golf course management. Impressive for a psych major!

Huang is not the least bit surprised at David balancing his research, teaching and service so well.

“David demonstrates all the traits of a good scientist: dedication, self-motivation, hard-working, keenness, creativity, and systematic and objective thinking.”

His diligence has paid off, as, in the coming months, David expects to defend his dissertation, Metabolic and Molecular Factors Regulating Heat Tolerance in Bentgrass Species, and graduate in Fall 2015. His post-doc plans include “continuing to do research in plant physiology and molecular biology and continuing to contribute to science and solutions.”