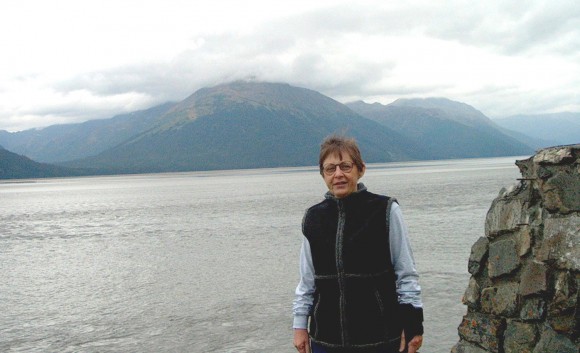 Eleanor Bochenek on a research trip to Alaska.

Winter flounder, Pseudopleuronectes americanus, support an important commercial and recreational fishery along the northeast coast of North America. Highest abundance occurs in the most northern part of their range. However, populations have declined significantly since the 1980s as a result of climate change, poor water quality and estuarine habitat loss. Due to warming ocean temperatures, many believe that the southern range of winter flounder has migrated north with New Jersey now being at the southern extent. Winter flounder are unlike most other fish species in that they reproduce during the winter months and spawn in estuaries in late winter to early spring.

Winter flounder fisheries in New England and the Mid-Atlantic are managed by the New England Fisheries Management Council (NEFMC) in federal waters. The NEFMC classified estuaries as well as inland and coastal bays as Essential Fish Habitat (EFH) for winter flounder eggs and larvae as far south as the Delaware Bay. No dredging could take place in these waterways during the winter and spring months because of the EFH designation.

The local community, fishing docks and marina owners in Cape May County contacted Eleanor Bochenek, director of the Fisheries Cooperative Center at Rutgers, to examine the EFH designation for winter flounder eggs and larvae in southern New Jersey with emphasis on waterways in Cape May County, NJ. The NEFMC was in the process of updating the EFH designation for winter flounder, restricting marina and channel dredging as well as beach replenishment activities from January 1 through May.

According to Bochenek, this designation created significant problems since “these activities must now be backed up into the spring and summer months when recreational vessels are being launched in these same areas and when visitors use local beaches.”

This restrictive dredging timetable increases the demand and the price of dredging. “There are times when the high demand for dredging in Cape May County results in areas not being dredged because of the limited availability of dredge operators,” explained Bochenek. “This can greatly impact marina businesses should the sediment accumulation become too high and prevent patrons’ boats from docking at their facility.”

“In addition, beach replenishment is very important for the economic health of local beach communities and is best done in the winter when few people travel to the beach,” says Bochenek. “This has been an issue for marine-related businesses for many years.” 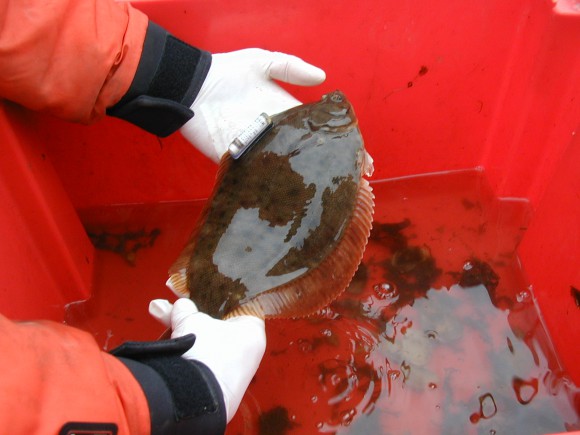 Winter flounder with ultrasonic tag used to determine habitat use and movements in Barnegat Bay as part of Rutgers finfish research.

Bochenek and her technician analyzed winter flounder early life history characteristics needed to survive in these waterways as well as fisheries independent surveys to determine abundance trends. Many of the environmental requirements for winter flounder eggs are seen in the Cape May Inland Bays and Cape May Harbor such as temperature, depth and salinity.

“Water temperatures tend to be warmer in Cape May County that could be an issue because larvae and juveniles tend to search more for food to sustain their raised metabolism which increases the chance of predator interactions.” But, as Bochenek explained, it is believed that bottom sediment type is not conducive to the laying or survival of winter flounder eggs. “In some waterways in Cape May County, the sediment is comprised of fine silt locally known as ‘black mayonnaise’ that could smother the eggs and limit the dissolved oxygen content reducing hatching success.”

The sedimentation rate is also thought to be too high in some areas, explained Bochenek. “Local marina owners in Cape May County need to dredge their marinas hopefully every five years but they would like to dredge more often because of the buildup of fine silt.” The bottom current speed is unknown in most of the waterways, but could possibly be another factor against egg presence; however data is currently not available.

The National Marine Fisheries Service, the New Jersey Department of Environmental Protection and the Virginia Institute of Marine and Coastal Science have each conducted bottom trawl surveys for finfish in marine, nearshore and inland waters of New Jersey.

“We analyzed winter flounder catches from 2008-2014 in these surveys and found that there is a southward decline in winter flounder abundance for that timeframe,” said Bochenek. Abundance was low from south of Great Bay and very low in Cape May County areas. “Our analysis and recommendation to remove EFH designation for eggs and larvae in Cape May County waters was submitted to the NEFMC for their review.”

Through the work of Bochenek and other scientists at Rutgers, along with marina owners and commercial fishermen, the NEFMC voted in April 2015 to remove the EFH egg and larvae designation for winter flounder from waterways from Absecon Inlet south because of the decline in abundance of winter flounder, the issue of high sedimentation rate and very fine silt in many locations.

“By permitting dredging during the winter and early spring in these areas, the dredging window has been opened and will have a very a positive economic impact on maritime businesses in the area,” said Bochenek.