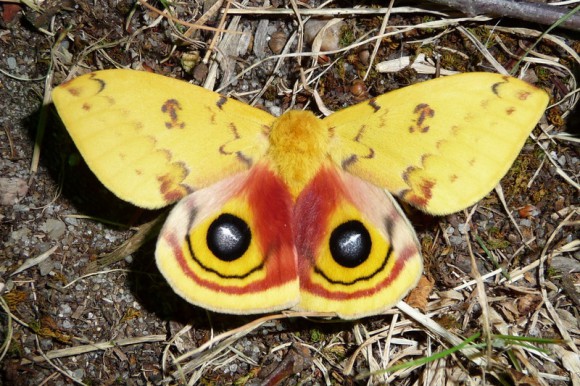 The Io moth is being proposed as the state moth of New Jersey.

It’s amazing what some Rutgers people can do during their spare time. What started as a series of local public moth nights that Liti Haramaty, marine sciences researcher at the Department of Marine and Coastal Sciences, and David Moskowitz, Ph.D. candidate in Entomology, began in East Brunswick in 2005, has developed into the National Moth Week event, with participants in every state of the U.S. and in over 30 countries. Not only did they launch a global citizen science project, they could also be considered global trendsetters: mothing is the new birding.

And they’re at it again. Starting back on their own turf in New Jersey, they are advocating what could grow into a nationwide phenomenon: naming a state moth. Working with New Jersey Assemblywoman Nancy Pinkin (D-18), Haramaty and Moskowitz, representing the Friends of the East Brunswick (NJ) Environmental Commission, have launched an effort to name the Io moth (Automeris io) as the official New Jersey State Moth. If approved, it would make New Jersey the first state in the U.S. to name a state moth. Read more at National Moth Week.