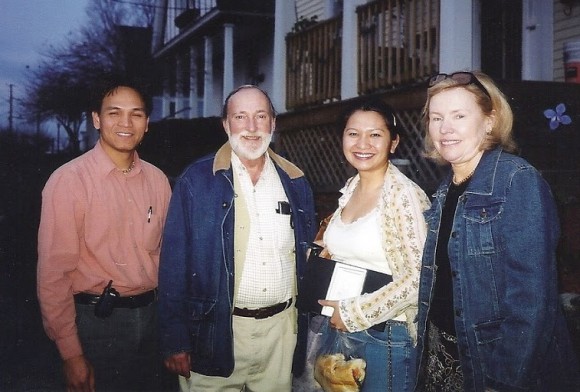 The late George Morren and widow Janet Gardner with Sayon Soeun and his wife, Sophy Theam, during one of their meetings in Lowell, Mass.

The widow of former SEBS human ecology professor emeritus George Morren, filmmaker Janet Gardner, produced the documentary, Lost Child – Sayon’s Journey, which is dedicated to Morren’s memory. The documentary will be shown on THIRTEEN (WNET) at 10:30 p.m. on April 30, and broadcast on public television stations nationwide. Morren played a key role in the development of “Lost Child,” which tells the story of Sayon Soeun, a former child soldier for the Khmer Rouge, who is now an American citizen with a wife and family in Lowell, Mass.

Morren and Gardner met with Sayon and his wife about telling Sayon’s story and helping to find his lost family in Cambodia. Morren did the research to identify a DNA laboratory that could determine whether Sayon was related to the people he meets in the film who claim to be his lost siblings and extended family. Unfortunately, Morren did not live to see the finished film. He passed away in September 2011, more than a year before its completion. Morren’s name does appear in the credits and the film is dedicated to his memory. Below is a description of the film and the director’s work by The Gardener Documentary Group.

Lost Child – Sayon’s Journey, an award-­winning documentary from The Gardner Documentary Group, explores the Cambodian genocide through the eyes of a former Khmer Rouge child soldier.

In his own words, Sayon Soeun confronts his childhood experiences during Cambodia’s darkest hour; revealing for the first time what he witnessed and struggled with as he came of age.

Soeun was abducted at the age of six, exploited by the Khmer Rouge; his family life and education stolen. His recovery and redemption from unimaginable evil entails his transition from an orphanage in a refugee camp to his new life with a loving American family in Connecticut.

This powerful and compelling work follows Soeun on a healing journey to Cambodia. He meets people who insist they are the family he thought was lost, and forgives himself for his complicity as a Khmer Rouge child soldier.

THIRTEEN, which will broadcast Lost Child in the New York Metropolitan area, is serving as the presenting station for the documentary’s broadcast by local public television stations across the country. The broadcast coincides with the 40th anniversary of the end of the Vietnam War and the rise of the Khmer Rouge regime that toppled the government of Cambodia in 1975.

Now in his 40s, Soeun directs a charity called Light of Cambodian Children in Lowell, Mass., where he lives with his wife and child. After more than 35 years, he recently made contact with brothers and a sister he assumed were dead. The film builds to a suspenseful conclusion as Soeun receives the results of DNA tests that will confirm or refute his relationship to the people he meets in Cambodia, who are certain he is their brother.

“Sayon helped me realize how easily children can be exploited in war,” said director and co-­producer Janet Gardner. “I admire his ability to lead Light of Cambodian Children, a charity that gives children of his fellow refugees the kind of childhood that he was denied.”

Janet Paxton Gardner founded The Gardner Group, Inc., in 1990 to direct and produce documentaries that emphasize the human experience in the context of historic events. Her documentaries have received national and international awards from the International Documentary Association, National Education Media Network, CINE, Casey Journalism Center and The Society of Professional Journalists and its Deadline Club.

Gardner began her career as a field producer, film editor and news writer for NBC News and WNBC­-TV, WRC-­TV (Washington, D.C.) and CBS News. As a print journalist, she was a feature writer for The (Cleveland) Plain Dealer, and contributed to The New York Times (New Jersey correspondent), Philadelphia Inquirer, and Boston Globe. Gardner is an alumna of New York University’s Graduate Institute of Film and Television (now Tisch School of the Arts) and Cooper Union.

For further information about the documentary, visit lostchildthefilm.org. The website was made possible by a grant from the New Jersey Council for the Humanities, a state partner of the National Endowment for the Humanities. For more information on The Gardner Documentary Group, visit gardnerdocgroup.com or call
212-­ 279-­5611.