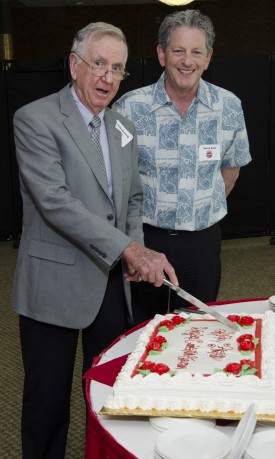 A strong workforce will support a strong community. That was the topic of conversation when John and Anne Gerwig asserted their desire to help all of Rutgers Cooperative Extension by establishing a fund that will provide resources to extension professionals in perpetuity. I am pleased to announce that, in honor of the Smith-Lever Anniversary, John and Anne have jointly established the “John and Anne Gerwig Director’s Endowment for Rutgers Cooperative Extension,” with a gift of $200,000.

The goal of this fund is to empower Cooperative Extension professionals so that they can make a bigger impact on our communities. A portion of the fund will be reserved to award through a formal “request for proposal” process set up and managed by the Director’s office. Remaining funds will be used to support emerging issues, internships, awarding additional proposals and other needs that arise.

There is no better representation of the embodiment of Cooperative Extension than John and Anne Gerwig. In this, the 100th year of Rutgers Cooperative Extension, we are reminded by Dr. John L. Gerwig of his 75 years of involvement. John holds the title of the longest-serving director of extension at Rutgers, perhaps nationwide, and was a 4-H member from the age of 5. Early in his career he became the extension agronomist before becoming director.

Throughout his 30 years as director, during which RCE underwent tremendous changes, John remained perceptive of the state’s needs and the philosophy of Cooperative Extension and the land-grant system. He maintained that agriculture made a positive contribution in an urban state. He also asserted that agents working across county lines and the productive use of computers were the basis for the future design of the N.J. Cooperative Extension programs. His visionary leadership resulted in N.J. becoming a national model for techniques used to reach urban communities in such areas as urban gardening, 4-H for at-risk youth, and family and community nutrition. 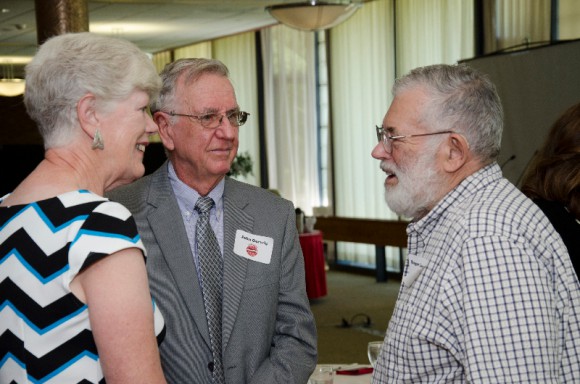 L to R: Anne Gerwig, John Gerwig and Roger Locandro, professor emeritus and former extension specialist in the Department of Ecology, Evolution and Natural Resources, at the Rutgers retirees’ luncheon in 2014.

Anne also broke new ground for Cooperative Extension. She led the university’s Expanded Nutrition Education Program to reach limited resource families and showcased extension’s work with these families to the greater university community. She was also instrumental in obtaining critical employee benefits for paraprofessionals in extension. Both John and Anne have long understood the importance of communicating the significance of extension programs and securing funding.

We will be seeking to thank John and Anne Gerwig by encouraging matches to their fund. Please help us share the news. Donations may be directed to Rachel Karl’s attention at the following address: Martin Hall, 88 Lipman Drive, 3rd Floor, New Brunswick NJ 08901. Checks should be made out to the Rutgers University Foundation with “Gerwig” written in the memo field. Rachel can be reached at 848-932-3593 or by email at karl@njaes.rutgers.edu.

Please feel free to reach out to the Gerwigs in appreciation should you have a personal relationship with them.