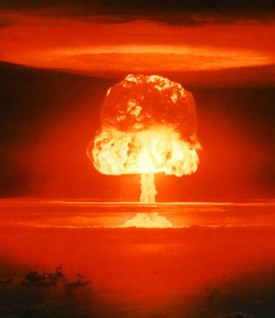 According to the scientists, such a war could produce so much smoke from the fires ignited by attacks on cities and industrial areas that the smoke would be blown around the world, leading to cold, dark and dry conditions on the ground for more than a decade and producing the largest climate shift in recorded human history.

“We were very surprised that even such a limited nuclear war, using only 100 very small nuclear weapons, could produce such a widespread effect on food production,” said Robock, a distinguished professor of in the Department of Environmental Sciences. “The impacts on agriculture would be similar around the world, producing an immediate food crisis, with hoarding and rapid increases in the price of food worldwide,” he added.

As Robock explains, famine and revolution have resulted in the past from much smaller and shorter-lived disruptions in agriculture, such as those after regional droughts or large volcanic eruptions. “The impact of the nuclear war simulated in our study could sentence a billion people now living marginal existences to starvation,” he said.

According to Robock, “the greatest nuclear threat still comes from the United States and Russia, each with thousands of nuclear weapons. Even the reduced arsenals that will remain in 2017 after the New START treaty threaten the world with nuclear winter.”

“The environmental and humanitarian impacts of the use of even a small number of nuclear weapons must be considered in nuclear policy deliberations,” he added.