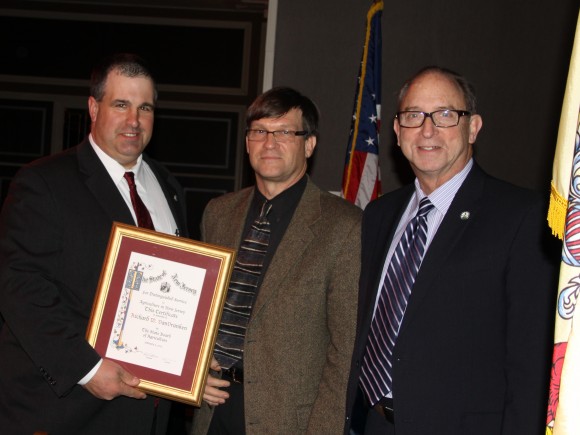 “Rick VanVranken has served New Jersey’s agriculture industry with passion, dedication and enthusiasm for decades,” said New Jersey Secretary of Agriculture Douglas H. Fisher.  “His wealth of knowledge and knack for innovation and promotion has made him an indispensable resource for our farmers in South Jersey.”

VanVranken earned a Bachelor of Science and Master of Science degrees in vegetable crops from Cornell University, coming to New Jersey in 1983 to serve for the last 32 years as Agricultural Agent at Rutgers Cooperative Extension of Atlantic County.  Now at the rank of professor, he heads the county extension office, as well as writes a marketing column for the American Vegetable Grower magazine.

VanVranken is well known for his work in ethnic and specialty crop development.  He is co-founder of the Ethnic Produce Production and Marketing Working Group, a multi-state, multi-disciplinary team of extension agents, specialists and researchers from Rutgers, UMass, Cornell,  Penn State and University of Florida that researches and conducts outreach programming on the marketing and production potential of new ethnic crops for East Coast farmers.  He established the WorldCrops.org website that helps farmers determine the produce needs of ethnic communities and how to grow those crops. His leadership in developing these new markets was recently recognized with the Northeast Region Excellence in Extension award from the USDA National Institute of Food and Agriculture.

VanVranken has actively worked to help specialty crop farmers increase their share of the retail food dollar and increase farm sustainability through direct sales to consumers. He was appointed to the first committee that developed New Jersey’s initial agricultural management practices for farmer to consumer direct marketing and received a $350,000 grant from the Mid-Atlantic Consortium to develop new methods of outreach via the internet to reach advanced agricultural audiences with marketing and local production information.  He also collaborated in developing educational programs and hosting the annual Mid-Atlantic Direct Marketing conference from 1989 to 2009.

Combining his role as an educator with his passion for marketing, VanVranken has incorporated public education about all things ‘Jersey Fresh’ in his extension outreach programming.  He calls in weekly to deliver a ‘Facts from the Farm’ radio spot that has been heard live on stations across South Jersey every Saturday morning for the past 17 years. For his latest project to ‘tell the story’ of Atlantic County’s specialty crop production, he worked with the Atlantic County Board of Agriculture to obtain a Specialty Crop Block Grant to fund a mobile market/cooler wrapped with graphic scenery of Atlantic County farms.

VanVranken has received many grants to support his work and has published a variety of articles relating to his activities.  He also has received multiple awards and recognitions.  He chairs the RCE Vegetable Working Group, and  is a member of the Agritourism Working Group,  both of which have been recognized with the SEBS/NJAES Team Excellence Award.

In addition to his full workload, Rick has been an active leader in the American [Equestrian] Vaulting Association and the U.S. Equestrian Federation, serving as a regional and national officer of the AVA and on the USEF High Performance Vaulting Committee.  He also coordinates and participates as a coach and lunger for New Jersey’s Shooting Stars Vaulting Club.  Rick and his wife, Sheila, have three grown children.

Since 1932, the New Jersey State Board of Agriculture has awarded the prestigious Citation for Distinguished Service to Agriculture to men and women who have given unselfishly of their time and talents to the advancement and betterment of the agricultural industry and rural life in New Jersey. This award is given to recognize and honor those individuals who have made outstanding contributions of public service to New Jersey agriculture.

Organizations who qualify to send delegates to the New Jersey State Agricultural Convention may nominate a state farmer for the award.  For more information on the Distinguished Service to Agriculture Award, visit www.nj.gov/agriculture/about/sba/guidelin.html.