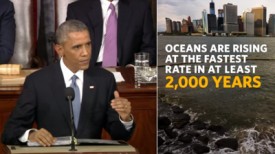 In President Obabma’s 2015 State of the Union address on January 20, a reference to Professor of Marine and Coastal Science Benjamin Horton’s research on sea-level rise appeared on a slide on the White House website during a live stream of the president’s speech as he told Congress and the nation, “if we do not act forcefully, we’ll continue to see rising oceans, longer, hotter heat waves, dangerous droughts and floods, and massive disruptions that can trigger greater migration, conflict, and hunger around the globe.” Read more at Rutgers Today.