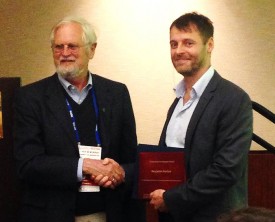 Ben Horton, professor in the Department of Marine and Coastal Sciences, received the 2014 Ocean Sciences Voyager Award from the American Geophysical Union (AGU) last month. The award is given to mid-career scientists in recognition of significant contributions and expanding leadership in ocean sciences.

Horton’s research focuses on the mechanisms and nature of past sea-level changes, including those associated with earthquakes, tsunamis and storms, with the goal of understanding how these processes will impact future coastal environments.

Horton has rapidly distinguished himself as a leader both within and beyond his discipline.

Andrea Dutton, professor in Department of Geological Sciences at the University of Florida,
said in her citation for the award, “Certainly, the impact and quality of Ben’s publication record alone qualifies him for the Voyager Award. Beyond the high quality and sheer number of his scholarly contributions, Ben exemplifies many additional qualities that speak to his promise for continued leadership in ocean sciences, including his talent as an educator—both within academia and beyond—and as a leader in interdisciplinary science teams.”

“This award recognizes the students, colleagues and mentors who have always been supportive of me, both professionally and personally, throughout my career. But I would not have received this award if I had not had the support of my family who remind me every day of what matters in life,” said Horton.

The Ocean Sciences Voyager Award, given in even-numbered years to mid-career scientists, recognizes contributions in ocean sciences, which may include but are not limited to the awardee’s research impact, innovative interdisciplinary work, educational accomplishments (mentoring), societal impact, or other relevant contributions, and to acknowledge that the awardee shows exceptional promise for continued leadership in ocean sciences.