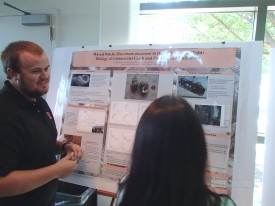 Collin Dobson and his award-winning poster.

Dobson’s poster, titled “Waved Whelk (Buccinum undatum) in the Mid-Atlantic Bight: Biology of Commercial Catch and Population Distribution,” described research he conducted this past summer in Bivalve, NJ, as part of the Research Internships in Ocean Sciences program in the Department of Marine Science.

His research was part of a larger project, led by principal investigators Daphne Munroe and Eleanor Bochenek, scientists at HSRL, that will study a new fishery developing in the Mid-Atlantic region for Waved Whelk that is as yet unmanaged, meaning that important biological data about the sustainability of this fishery is not currently available to managers or fishers. The work is funded by a grant from the NOAA Saltonstall-Kennedy Grant program, in which Rutgers scientists working collaboratively with industry and federal fishery scientists to fill some of these data gaps.

Dobson’s internship gathered important information on the relative abundance of whelk in the Mid-Atlantic using new underwater imaging survey techniques (HabCam) and collected by the federal scallop survey. In addition, he gathered baseline fishery data on whelk biology and population demographics, both of which will help establish a foundation for management strategies to ensure sustainability of the stock and responsible fishery development.