Announcement from Robert M. Goodman, Executive Dean of the School of Environmental and Biological Sciences

I am delighted to announce the appointment of Dr. Mukund Karwe as our next dean of international programs. He will transition to this new role over the next month, during which time an acting chair of the Department of Food Science will be sought and appointed. Effective immediately, Megan Francis in the international programs office will report to Dr. Karwe. 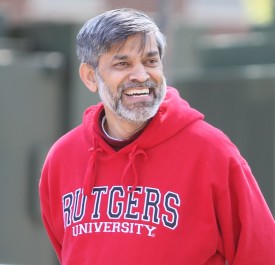 Dr. Karwe is Professor of Food Engineering in the Department of Food Science in the School of Environmental and Biological Sciences. He served as the Undergraduate Program Director for eight years and subsequently as the Department Chair for seven years. He led the establishment of a 2+2 program in Food Science with South China University of Technology.

His research areas include food extrusion, microwave and hybrid baking, fortification of foods with omega-3 fatty acids, high pressure food processing, effects of processing on nutraceuticals in foods, cold plasma processing, and mathematical modeling of flow of food in human GI tract. He has published over 100 research articles and book chapters as well as a co-edited book. He has given research seminars and keynote addresses in Argentina, Australia, Brazil, China, France, Greece, India, Italy, Kuwait, S. Korea, Turkey, and the UK. He has hosted visiting scientists and students to his laboratory from Argentina, Brazil, France, Italy, India, and the Ivory Coast.

Dr. Karwe is a fellow of the Institute of Food Technologists and a recipient of several teaching excellence awards, including Rutgers’ Warren Susman award and IFT’s William Cruess Award. He is an avid mountaineer having climbed in the Himalayas. He takes his students hiking annually in the Catskills. He plays tennis, and enjoys yoga and classical music.

Please join me in congratulating Dr. Karwe on this appointment as he continues the excellent work begun by Professor of Environmental Sciences Lily Young, who led the Office of International Programs as dean since 2008.

Dr. Young, along with Program Coordinator Megan Francis, succeeded in building a robust and ambitious international program for the School and its students. One of the singular and strategic contributions Dr. Young made as dean of International Programs was to initiate the first Rutgers 2+2 programs with leading universities in China. She was appointed Provost of Rutgers-New Brunswick, effective October 1.